Turn That Noise Down - Queen 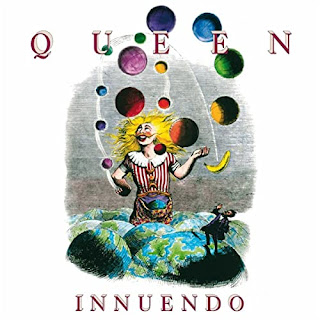 So many well-known albums turn 30 this year and Steve Taylor-Bryant and Susan Omand travel back to 1991 to revisit some of the sounds of their youth that made parents shout "Turn that noise down!" This week, Susan looks back through the tears at Innuendo...
I have a bit of a confession to make. I haven’t actually listened to all of Queen’s albums all the way through in track order… [*faints* – Ed] I know, I know, but there it is. Don’t get me wrong, I’ve loved their music since forever, Freddie is undeniably God and I know all the words to all the singles, thanks to their constant radioplay back in the day. As an aside, I still remember my mother pulling the car over to the side of the road in 1975 (I was 6 or 7 at the time), when she first heard Bohemian Rhapsody on the car radio – she was astounded that a full 6 minutes of almost operatic vocal and stunning instrumentation could be played on Radio 1. That was it, she was hooked.
However, it would take me almost 10 years before I picked up the all-devouring habits of a fan, with the 1984 album The Works being the first Queen album I remember buying for myself. Then I bought The Complete Works (a tasty little Greatest Hits compilation), followed, for many reasons, by A Kind of Magic in 1986 and then The Miracle in ‘89.
But it is their 1991 album Innuendo that I played, and play now, most often and it makes me so happy and so sad in equal measure. Sad, obviously, because this would be the last studio album of new Queen music with Freddie at the forefront and happy because it gratifyingly is the absolute work of genius that lives up to and surpasses every expectation. Even though Freddie knew he was dying, his voice still has that immense intensity and he, himself, still had that operatic grandeur and physical bombast, albeit delivered from a body that was a lot more fragile.
Every stage of the grief to come is represented in these songs. From the denial of Headlong and The Hitman, both of which hark back to the Queen of 1970s hard rock, through the anger of I Can’t Live With You, the heartbreak of the title track and the melancholy acceptance of These Are the Days of Our Lives, with a final rallying call in The Show Must Go On, this, for me, is pretty much the perfect denouement album.
Some critics panned the album at the time, calling it lightweight and forgettable. More recently, specifically since Bowie did something similar with the much lauded  Blackstar album in 2016, those same critics are realising the significance and virtuosity of this, the final Queen album and are now giving it the “masterpiece” epithet that it so rightly deserves. As I said at the start, Innuendo is the Queen album that I play most often, even now, so it’s quite difficult for me to choose a favourite track to share. However, this one, for me, embodies Freddie’s uniquely quirky, self-assured stage presence with a scattering of the theatrical sparkle that will always surround the Freddie shaped hole in the cosmos… or I’m Going Slightly Mad.
Image - Amazon
Email ThisBlogThis!Share to TwitterShare to Facebook