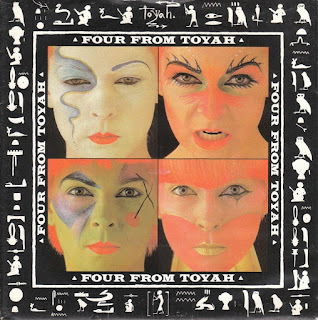 Inspired by our series of articles looking back at music released 30 years ago, Jimmy Hunter takes a step further back in time to give us a Song of the Day 1981. This week, he's being very mysterious...

Did anyone listen to the other three? Well I didn’t, not for a while at least. But when I eventually did, I was happy that I did so. Yes, I was captivated by the main track that had been picked up by BBC Radio 1 at the time. Having seen this artist perform it live almost 2 years ago* I can say very safely that neither the record nor the artists have aged at all. Both still possess depth and an energy that’s very evident especially in live performances.

I shan’t keep it a mystery any longer [seriously?? – Ed] – I’m bopping away this week to Four From Toyah. Yes, the lead track being It’s a Mystery and clearly the one that got attention and was commercially the more … well, acceptable?

However I do suggest you listen to all of it**. Revelations is a great example of post-punk/new wave with great guitars and synths. It’s also rather pop-like in its execution and it benefits from that. War Boys is more punk-y and yet very different to the other tracks. Like Revelations it has a vocal riff that suggests traditional tunes that seem very familiar.

Angels and Demons is a great track and one that’s very reminiscent of the new wave style of the very early ‘80s, despite the fact that it’s a slow track. You almost find yourself thinking of Soft Cell or similar.

I’ve had a really great time revisiting this and since I did, I’ve revisited some more. I hope you enjoy and discover, if you haven’t already, an artist that forms part of the solid bedrock of genuine indie new wave.


* There's also a stripped down live performance of It’s A Mystery is here. Not the live version I saw as she does two very different tours on alternate years, but it’s the same dress and you can get an idea of what I said in my opening comments.
** In case you want to listen to "the other three" Side 1 of the EP is here. and Side 2 of the EP is here.
Image - Amazon
Email ThisBlogThis!Share to TwitterShare to Facebook