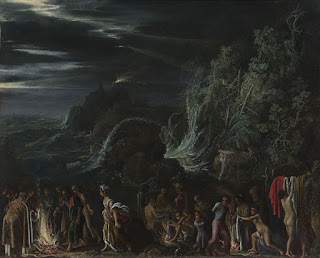 What’s the painting called, who is the artist and when was it painted?
Saint Paul on Malta by Adam Elsheimer, painted around 1600.


What does The National Gallery say about it?
The story of Saint Paul’s shipwreck on the island of Malta is described in Acts (28: 1–6), and Adam Elsheimer has taken advantage of the biblical description to portray a night scene: ‘And the barbarous people shewed us no little kindness: for they kindled a fire, and received us every one, because of the present rain, and because of the cold’ (Acts 28: 2). This allowed him to use strong contrasts of light and darkness for dramatic effect. At the largest fire at the left corner – the brightest part of the picture – Saint Paul calmly drops a snake, which had bitten him, into the flames. The islanders who saw that he had not been injured by the snake’s venom were convinced that he was a god.
A larger/clearer look at the painting [details brightened using Photoshop] 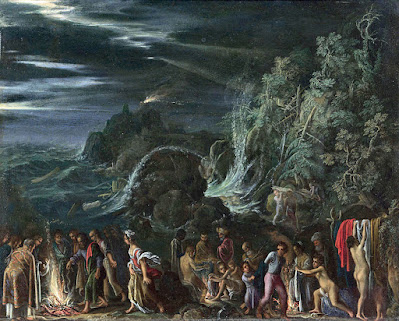 What’s interesting about the painting?
Instead of painting on canvas or wood, Elsheimer painted on copper sheets, which allowed for a lot of detail to remain crisp in his paintings. Brightening the photo really brings out these details but what makes it even more impressive is its original size - for an oil painting, it's dinky! At only 16.8 x 21.3 cm (6.6 x 8.3 inches or just over A5 size) there's an awful lot going on here.

For me, this is a very elemental painting that conjures sounds and smells in its visual acuity. I love the light in the sky and the fire on the rocks in the background, whose sparks are echoed by the campfire in the foreground. There's also a wonderful splash of movement in the stormy waves that's reflected in the sinuous branches of the trees.

I think there's too much going on in the foreground - it's too peoply (I don't do peoply.) The group by the fire would have been enough I think, especially if the solitary soul on the path from the cove was also kept as a mid-ground balance. Depopulating would change the focus of the painting to be more about the storm and the wreckage which, for me, would have made it a more dramatic piece.
Would I have it on my wall?

Yes, definitely. Although it would have to be somewhere that it could be looked at closely because it's so small.