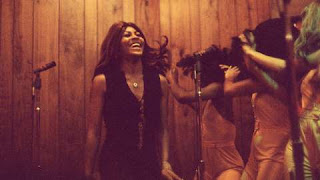 Coming to Sky Documentaries on 28th March, watch the trailer for Tina, a documentary that follows the life, career and legacy of 'The Queen of Rock 'n' Roll' Tina Turner...

Press Release
With a wealth of never-before-seen footage, audio tapes, personal photos, and new interviews, including with the singer herself, this new documentary presents an unvarnished and dynamic account of the life and career of music icon Tina Turner.

Everything changed when Tina began telling her story, a story of trauma and survival, that gave way to a rebirth as the record-breaking queen of rock 'n' roll. But behind closed doors, the singer struggled with the survivor narrative that meant her past was never fully behind her.

Directed by Dan Lindsay and T.J. Martin, the documentary charts Tina Turner's early fame, the private and public personal and professional struggles, and her return to the world stage as a global phenomenon in the 1980s.

Angela Bassett, Oprah Winfrey, journalist Kurt Loder, playwright Katori Hall and Tina's husband Erwin Bach are among the interviews in the intimate documentary, which gets its UK premiere as part of Glasgow Film Festival and is available to watch online from 5th to 8th March.