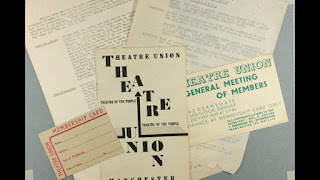 Donated on behalf of the Theatre by the actor and Theatre Workshop alumnus Murray Melvin, the archive comprises 140 boxes containing a diverse array of material including scripts, performance recordings, letters, photographs, rehearsal notes, press cuttings and props. It sheds light on the work of Theatre Workshop’s visionary founder and director, Joan Littlewood, both before and during her tenure at the Theatre between 1953 and 1979.

The archive contains material related to critically acclaimed Theatre Workshop productions of Oh, What a Lovely War!, Shelagh Delaney’s A Taste of Honey, Brendan Behan’s The Hostage, and many successful reinterpretations of the classical drama repertoire. The later portion of the archive covers the Artistic Directorships of Ken Hill, Maxwell Shaw, Clare Venables, Philip Hedley and Kerry Michael (up to the year 2017). In particular, the material reflects the tenures of Philip Hedley and Kerry Michael at Theatre Royal Stratford East, who were notable for their support and encouragement of diversity in the theatre with the rise of Black and Asian theatre and productions and companies such as Ramps On The Moon.
The archive contains material relating to D’yer eat with your fingers (1998), a satirical state-of-the-nation production derived by a company that included Shobna Gulati, Syreti Kumar and Nina Wadia and directed by Indhu Rubasingham, as well as The Big Life (2005) the highly successful directorial debut of Clint Dyer, which became the first All Black British Musical in the West End. Other innovative productions under Kerry Michael include Home Theatre (2013 and 2015), which involved bespoke one person performances in the homes of members of the public and the musical, Tommy, an integrated production with Deaf and Disabled artists that was fully accessible for all audiences in 2017. 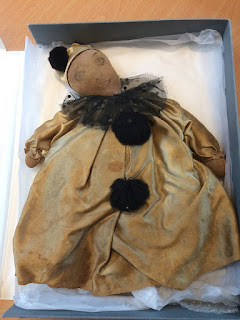 Joan Littlewood was renowned for her radical vision, socialist principles and unorthodox working methods within the British theatre scene. Theatre Workshop’s resulting innovative approach and international vision enjoyed great success, particularly in Europe. An example of innovation in the company was the use of the theories of movement developed by the pioneering dance artist and theorist, Rudolf Laban. Theatre Workshop were taught Laban’s techniques by Jean Newlove, who had been Laban’s first assistant when he came to England before the Second World War. A number of the Artistic Directors who followed Littlewood had worked with her, and through their work continued her legacy of socially and politically engaged theatre with strong local roots and an internationalist outlook.

Highlights of the archive include:
Papers relating to Theatre of Action - providing an insight into the agit prop theatre company, which Joan Littlewood set up with Jimmie Miller (now better known as the folk singer, Ewan MacColl) in 1934 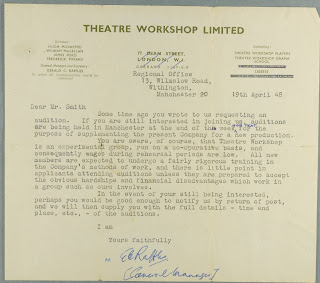 Papers relating to the socialist nature of the company - including a letter from Theatre Workshop’s manager, Gerry Raffles, to a prospective member of Theatre Workshop (1948), warning that “all new members are expected to undergo a fairly rigorous training in the Company’s methods of work, and there is little point in applicants attending auditions unless they are prepared to accept the obvious hardships and financial disadvantages which work in a group such as ours involves.”

Joan Littlewood’s cast notes for performances of Oh, What a Lovely War! (1963-1964) - providing an insight into this ground-breaking production with its highly innovative approach to staging a musical about the First World War. A doll used in the production is also included in the archive 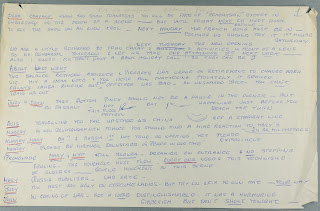 This archive is a valuable new addition to the British Library’s rich theatrical collection which includes material relating to playwrights, directors and actors such as Harold Pinter, Laurence Olivier and Joan Littlewood, as well as a vast historical collection of over 100,000 theatrical playbills from the 18th and 19th centuries. Joan Littlewood’s archive was acquired by the Library in 2015.

Work to catalogue the material will begin in 2021.

Helen Melody, Curator of Contemporary Literature and Creative Archives at the British Library, said, “We are delighted to have acquired the archive of Theatre Workshop and Theatre Royal Stratford East, which both hold such a significant place in the theatre landscape of the 20th century and beyond. Theatre Workshop’s story in particular highlights innovations in British theatre under Joan Littlewood’s direction, which can still be seen today. I would like to pay special tribute to Murray Melvin, who, as honorary archivist, created and developed this rich archive, which I know will be an invaluable addition to the British Library’s theatrical collections.”

Murray Melvin responded, “The archive has been in lockdown for almost a year, like us all. I am very grateful to all those involved at the British Library who have worked behind the scenes to bring this day to fruition and the Theatre Royal Stratford East Archive back to life.”

Nadia Fall, Artistic Director at Theatre Royal Stratford East said “For anyone who loves and studies theatre, the colourful and rich past of our founding mother Joan Littlewood, Theatre Workshop and Theatre Royal Stratford East is a cornerstone of British theatre history. We are regularly contacted by students, historians and artists wanting to explore it, so we are over the moon that this precious archive will reside as a resource at the British Library. I’m so very grateful to Murray Melvin for his dedication to this mammoth piece of work, and to his colleagues Karen Fisher and Mary Ling too. We are indebted to every person who shared their memories and artefacts, and who helped make this archive such a fascinating and important resource.”
Images & info - British Library
Email ThisBlogThis!Share to TwitterShare to Facebook