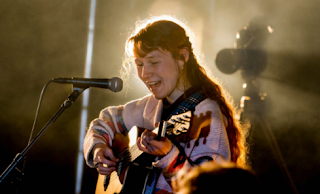 Kicking off tonight, the team behind Edinburgh Tradfest presents its 2021 online series of Spotlight concerts...
Press Release
The concerts will all be available to watch online, with tickets bookable via www.soundhouse.org.uk and promises a series of ten weekly intimate gigs, presented as-live, and featuring 16 of the best emerging and established acts from the world of traditional folk, jazz, and Americana music.
Thanks to continued support from Creative Scotland, the series will kick off tonight, Monday 22nd February, with Romanian singer-songwriter Lizabett Russo, whose ‘wonderfully haunting vocal’ (BBC Radio 3), merged with elements of contemporary jazz, avant-garde folk, and the peerless improvisational skills and talent of award-winning jazz guitarist Graeme Stephen, is an unmissable combination.
Lizabett Russo said: “I am very excited to be opening Soundhouse’ Spotlight Series on 22nd February. Recording in front of a camera was a very different experience than performing in front of a live audience, but it was a pleasure to be working with the Soundhouse team again. I have missed live performances this past year, but it’s been interesting to explore different ways of collaborating and making music in new ways.”

As well as folk music, Soundhouse’s Spotlight Series will feature acts from the world of Americana, jazz and classical music, including Dominic Waxing Lyrical whose act combines pop, performance art, and Theatre of the Absurd; Trio Magico which combines the talents of three great jazz musicians (Paul Harrison, Mario Caribe and Stuart Brown) to emulate the compositions of Brazilian multi-instrumentalist Egberto Gismonti; and the award-winning, ever-evolving, innovative classical quartet Mr McFalls Chamber playing a range of music from tango, through jazz, rock, and contemporary classical.

In addition to these established musicians, The Soundhouse Organisation is delighted to partner with the Royal Conservatoire Scotland in Glasgow and Newcastle University, to showcase the brilliant emerging talent of eight young acts in the world of folk and jazz. With Rusty Wishart on bass, Josie Girgis on alto sax, Rachel Duns on tenor sax and Chun-Wei Kang on drums, audiences will be treated to a glimpse of the future of jazz with Spotlight Sessions: Jazz on Monday 1 March. While Scots and Gaelic vocalist Evie Waddell, experimental instrumentalist Jenna MacRory, vocal and instrumental duo Janice Burns and Jon Doran, and interlocking stringsmiths Chloë Bryce and Luc McNally will perform in theequally unmissable Spotlight Sessions: Folk on Monday 12th April.

Douglas Robertson and Jane-Ann Purdy, Founders of The Soundhouse Organisation and co-producers of Soundhouse Spotlight said: “It’s almost a year since we hosted our last concert in front of an audience at The Traverse. We could never have imagined that in February 2021, we would still be waiting to get back to doing what we love most - connecting musicians with music lovers in a sympathetic room.

“We are delighted therefore that we were able to return to The Traverse this month and film ten gigs especially for music lovers everywhere. Each concert features the very best from the genres audiences have come to expect from us: jazz, folk, Americana, with some classical and even pop thrown in for good measure.

“Using a five camera broadcast quality set-up and professional multitrack sound, the technical quality is in every way a match for the calibre of music on show.

“Treat yourself and give vital support to our musicians (90% of the takings goes direct to them) by subscribing to Soundhouse Spotlight. A new concert is available to view each week from Monday 22nd Feb.”

Alan Morrison, Head of Music at Creative Scotland added “For many years, The Soundhouse Organisation has provided a backbone for Edinburgh’s live music scene, so it’s no surprise to see the same quality of curation brought to an online platform. The Spotlight Series spans multiple genres, throwing a spotlight on new talent and seasoned performers alike. Crucially, it also puts these world-class musicians in front of an eager audience at a time when venue doors remain closed.”

The Soundhouse Spotlight Series runs at 20:00 on Mondays, from 22nd Feb to 26th April. Each concert, broadcast from Traverse 3, will be available to book for seven days and can be streamed for a week after purchase. For full programme information and to book tickets visit www.soundhouse.org.uk.
Image - Lizabett Russo performs at Traverse 3 for Soundhouse Spotlight Series; photo by Douglas Robertson