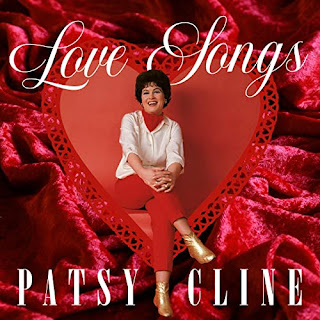 Didn't get that sudden rush of lovey dovey hearts and flowers yesterday? Never mind, we still love you. And we love this, the first official video for Patsy Cline's classic love song Crazy, too...

Directed by director and photographer Natalie O’Moore and beautifully filmed at Dee’s Country Cocktail Lounge outside of Nashville, the video vividly brings to life the yearning and heartbreak that Cline so perfectly emoted with every line and punctuated with every high note as a young woman, clad in vintage western wear, pines after the object of her desire who is with another woman. As the protagonist sways to the song on the jukebox, what first looked like someone in love starts to look more like an unhealthy infatuation as the night continues and her jealousy grows. A collaboration between the Patsy Cline Estate, UMe and UMG Nashville, the video kicks off a slew of new video content that in the coming months will include a new lyric video for her hit single Walkin’ After Midnight as well as nearly 50 video visualizers from her impressive catalogue.

Observant watchers will notice a cameo by country star Mickey Guyton as the performer on stage at the bar. The GRAMMY® nominee is an avowed fan of Cline’s and released a cover of Crazy in 2019. Guyton is the first Black female solo artist to earn a GRAMMY® nomination in a country category (Best Country Solo Performance for Black Like Me.)

"It is wonderful that Crazy remains such a beloved song 60 years after mom recorded it and it’s very exciting that its 60th anniversary is being celebrated with this great new video," said Julie Fudge. "I hope that mom’s fans enjoy it and that it also helps new audiences discover her music."

Crazy was written in 1961 by the legendary Willie Nelson when he was a young, struggling, unknown songwriter in Nashville named Hugh Nelson. Cline’s husband, Charlie Dick, first played her the song performed by Paul Buskirk and his Little Men (featuring Nelson) after he discovered it on a jukebox while waiting for her in a bar. While it didn’t make much of an impression on Cline at the time, Dick felt otherwise and went hunting for the record but couldn’t find it since it was on a small label. While at the Grand Ole Opry later that weekend, Nelson gave him a copy and as Dick explained to NPR in 2000, took it home and listened to it about half the night and kept Patsy up half the night, and she didn't think too much of that. Eventually a song plugger named Hank Cochran, who worked for the publishing company Nelson was writing for and was excited about the song, brought Crazy over to play for Cline while Nelson sat in the car. After some convincing from her producer Owen Bradley who radically changed the arrangement, Cline acquiesced and recorded the song with some changes of her own. Recording began on August 17, 1961, two months after a near-fatal car accident kept her in the hospital for a month. While she was recording, she kept hearing Nelson’s version, which was sung with less emotion and included a spoken section, in her head and she told Bradley she couldn’t sing it like that. In addition to this, severe pain in her ribs kept her from singing the high notes so after about four hours of trying Bradley sent her home. The musicians and the vocal group the Jordanaires laid down their parts without her. A week later when she returned to the studio, Bradley told her not to sing it like Nelson but sing it like she would. With Bradley leading and Cline singing, they made it a "Patsy" song and Cline nailed her vocals in one take. Not surprisingly, Nelson has said it is his favorite recording of his song.

The follow up to her hit single, I Fall To Pieces, Crazy was an instant smash and soared to #2 on Billboard’s Hot Country Singles chart while also furthering her crossover to the mainstream. With its jazzy chords and sophisticated arrangement, uncommon in country music at the time, Crazy quickly became Cline’s signature song and cemented her as an icon. Today the song remains an undisputed classic, ubiquitous in pop culture and beloved by generations. As All Music enthused, the song is one of those indestructible classics, a song so simple in its construction that it could be sung by anyone from Reba McEntire to Elmer Fudd ("cwazy, cwazy fo' feewin' so wonely") and still sound recognizable as real country with a message that crosses both boundaries and demographics. Named by Rolling Stone as one of The 500 Greatest Songs Of All Time and forever enshrined in the GRAMMY® Hall Of Fame, Crazy has influenced countless artists and been covered by Linda Ronstadt, LeeAnn Rimes, Mickey Guyton, Julio Iglesias, Shirley Bassey, Chaka Khan, Neil Young, Wanda Jackson, Loretta Lynn, The Kills, and many more, but nobody has ever sang it quite like Patsy Cline.
Image - Amazon
Email ThisBlogThis!Share to TwitterShare to Facebook