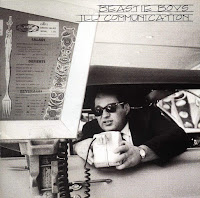 For Educating Omand, Susan Omand has been listening to music that she missed out on first time round. This year, our team of writers suggest albums for her to listen to in Educating Omand: Gap Year. This week, it's Beastie Boys and Ill Communication, suggested by Marc Nash...

I honestly thought I had listened to the Beastie Boys’ album Ill Communication before.

On doing some investigation, it turns out all I’ve heard are a bunch of singles ranging throughout a cross-section of their back catalogue, from Fight For Your Right and No Sleep til Brooklyn on their debut album through to Intergalactic on Hello Nasty, but have never actually sat down to a whole Beastie Boys album start to finish. Marc’s Gap year choice for me meant this was about to be rectified.

My god, this album is AMAZING! It ticks so many of my niche modern-jazz/ rap/ sampler/ funk/ prog/ psychedelic boxes it’s like it was specifically made for me. I stuck the album on with the view that I’ll give it a few listens through while doing something else, but I ended up sitting on the floor with headphones on, letting the incredible sounds wash around my head. There is just so much going on in each track.

From the dog whiny, pan pipey, laid back groove of Sure Shot (which I did remember as a single) we move to a manic minute of punk sensibilities that is Tough Guy. B-Boys Making With the Freak Freak somewhat defies description with sheep noises and distorted rap undercut by brilliant double bass riffs and samples – it’s one of those “you’ve got to be there” tracks. This merges seamlessly with the gloriously percussive minute of Bobo on the Corner that is a feast for the headphones. Root Down follows with almost disco funk guitar and latin beats under the ubiquitous rap. The wonderful moshpit filler single that is Sabotage is up next and this is followed by the quirky Get It Together which sounds like a slightly off-station radio in a very good way [for people under 40, you used to be able to turn a dial on a radio to find music rather than just digitally hit preset stations – Ed]. The repetitive piano in this is incredible – it should be really annoying but really isn’t. Back to the funky 70s guitar and latin grooves in the instrumental Sabrosa but with a much more laid-back Santana-esque styling. The layering of rhythms here is hypnotic and pure jazz-club - a definite late-night feel. The Update is an assault of the senses in comparison but that doesn’t mean it isn’t a tremendous track. The bass is back with a vengeance, coupled this time with discordant piano stabs, toms, cymbals and snare rim clicks. Another seamless run into the next song, Futterman’s Rule, and we head down the hippy prog route in this almost-instrumental with distorted guitar, fluttery Hammond melodies and tuned percussion – including cowbell. Alright Hear This is next, with scratches, electronic squeaks and Moroccan flutes - no, nothing surprises me any more about this album – over the thumpy bass.
We stay deep in the souks with the Arabian sounding strings of Eugene’s Lament, both bowed and plucked, that make the hairs on the back of my neck stand up and spices fill my senses – it’s just gorgeous. There’s a couple of minutes of Flute Loop which pulls us back north with a Great American Songbook feel to the music under the rap this time. Do It breaks the mood with the emphasis shifting to the vocal a lot more, probably because of a guest rapper. It’s probably my least favourite track on the album because of that, to be honest, and the siren sound in the last 30 seconds really grates rather than adding interest. The mood softens again though with Ricky’s Theme that takes us back to smoky 70s pre-disco clubs with laid back guitars, dreamy synth and a regular beat that lulls you into a false sense of security, until the orchestra invades near the end with counterintuitive strings and plinky piano that works really well. Heart Attack Man’s intro is a pisstake of a Mellencampy folky thing that then blasts into tuneless punk – cleverly executed but that’s probably all I could say for it. The Scoop is the kind of song that you could write off as “just noise”, and I did the first time I listened to it but, going back to it later, it’s got a lot going for it with jazz rhythms over latin beats and the sporadic piano phrases add interest. Shambala is a stunning contrast, with the basso profundo chanting making me sit up and take notice – ok, yes, I guess I can still be surprised by things on this album – and giving the whole song a tribal, elemental feel. It also proves that the order of tracks on an album was still important at this point in time – that contrast adds a lot. The vocal drone continues under the start of Bodhisattva Vow and the discordant pipes and clashing cymbals do add the ancient, Far Eastern twist to the track that its title suggests. The album is rounded out by Transitions, making for a pleasantly melodic end to a very surprising, very cool listening experience.