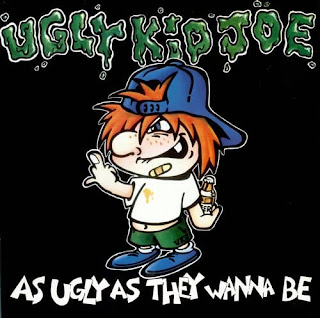 So many well-known albums turn 30 this year and Steve Taylor-Bryant and Susan Omand travel back to 1991 to revisit some of the sounds of their youth that made parents shout "Turn that noise down!" This week, Steve is As Ugly As They Wanna Be...

We have/had rules thus far in our Turn That Noise Down features. The album had to be out in that year, and released in the United Kingdom in the month we review it and had to be a studio recording of album length, no live performances, no greatest hits, no E.P’s. I’m breaking a lot of these rules this year and for good reason. 1991 was a cracking year for music I like, albums by some of my favourite bands, discoveries I made, but most of the 1991 output I constantly return to was released in a four month period from August to November and I don’t want to be bored for 8 months. Also, I’m starting with an E.P. But it’s the first E.P to ever go double platinum and entered the US Billboard chart in the top 5. I am of course starting this year in a rock vein and I’m as Ugly as They Wanna Be...

Ugly Kid Joe entered the public consciousness this year with a very successful single that ended up on the Wayne’s World soundtrack and would be repackaged for their full length album the following year, I’m talking of course about Everything About You. The song was everywhere and nearly as unavoidable as playing Wham! at Christmas but without the sickening boredom that followed Bryan Adams and Wet Wet Wet’s movie tunes. It was a great piece of fun rock with some real good humour and strong musicianship and rightly is one of the best remembered tunes on Ugly As They Wanna Be, along with Whiplash Liquor and Sweat Leaf/Funky Fresh Country Club. There was the short Heavy Metal to end the E.P that showed that this Californian outfit could rock it with their peers and except for the highly forgettable Too Bad with the E.P Ugly Kid Joe showed themselves to be a tight funky rock band with catchy riffs and and an extraordinary vocalist in Whitfield Crane. The one track I listen to more than any other, the one that showed that 1991 would have vast changes in the rock landscape occur is the darkly funny Madman. All together now...

Disneyland is the place to be,
C'mon baby, just you and me
Hand in hand, to Disneyland,
We go ! Not slow

Happiest place, in the world until a madman grabs a girl;
Hand in hand, with the madman she goes ! Oh oh !
Knife gleamin' no feelin's, axe wieldin', child stealin'
Madman is loose... in Disneyland. (in Disneyland)