Turn That Noise Down - Motörhead 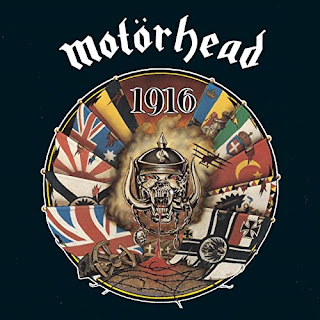 So many well-known albums turn 30 this year and Steve Taylor-Bryant and Susan Omand travel back to 1991 to revisit some of the sounds of their youth that made parents shout "Turn that noise down!" This week, Susan heads back to 1916...

I’ve been a Motörhead fan since … oh heck… 1980 when my Dad took home the Ace of Spades album, having heard the song on the radio, and it got played pretty regularly when it was his turn to choose the records we played on the big radiogram in the living room of an evening. Yes, we had a radiogram. But, more surprising than that, this was really the first “not old” record that I remember Dad buying – he had a lot of classical stuff and a lot of Rolling Stones and 1950s rock and roll but nothing that had been anywhere near the charts that I knew of and certainly nothing “heavy metal”. Thus began a fandom for me that has lasted 40 years so far.

1916 came out just over a decade later than Ace of Spades and, as an album, is a bit of a departure from the usual comfortably thrashing hard rock that the earlier albums are noted for. Indeed, listening back to it again now, some the songs sound more like the kind of stuff Lemmy’s previous band Hawkwind would do – there’s a glorious gothic progginess to the likes of Nightmare/The Dreamtime and Love Me Forever. However, others are definitely Motörhead’s signature rock and roll headbangers, albeit with the odd twist. There’s a saxophone on Angel City for goodness sakes! Although, allegedly, they drew the line at the tambourines that record producer Ed Stasium tried sneakily to add in. He got sacked for that, so let that be a lesson for you. No tambourines!

It’s five years last month since the world lost Lemmy Kilminster and I still really miss his face, his opinions and his voice, which is showcased at its most melodic in the title track for 1916, a slow stripped back ballad with organ, cello, bass drum and snare rather than frenetic percussion and driving guitars. Sorry if it makes you cry too.
Image - Amazon