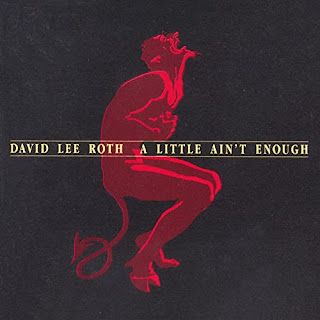 So many well-known albums turn 30 this year and Steve Taylor-Bryant and Susan Omand travel back to 1991 to revisit some of the sounds of their youth that made parents shout "Turn that noise down!" This week, Susan finds A Little Ain't Enough...

It should be a known fact by now that I am a fan of Diamond Dave aka David Lee Roth. I can be heard lamenting loudly [so what’s new? – Ed] about how Van Halen lost their way after he left the band in 1985 and only really recovered once he rejoined them in 2006. But, in those interim 20 years, Mr Roth also had a notable solo career which, although it continues to this day, understandably hit its heights in the late 80s and early 90s.

A Little Ain’t Enough is Roth’s third solo album. It’s very much more of the same of what fans were used to – fun, 80s rock; heavy on guitars and girls, light on angst and message. With the video for the title track single being banned from MTV almost immediately, for its controversial content, and the video for the second single, Sensible Shoes, also only receiving only strictly limited airplay, again content related, I can’t help but feeling that he shot himself in the foot with the visual music generation. Add in the fact that the album came out around the time that the Seattle Grunge phenomenon hit, rendering anything remotely fun in the rock world entirely obsolete, and it’s little wonder that it wasn’t critically well regarded and certainly not his most commercially successful, although I find it still highly enjoyable.

Video notwithstanding, the title track is a solid rock track and Shoot It, which follows, is very reminiscent of the Aerosmith sound at the time. Lady Luck is a harder rock sound, Hammerhead Shark is almost rockabilly rock n roll and Tell the Truth is pretty much Alannah Myles’ Black Velvet in melody and feel. Baby’s on Fire is percussion heavy discordance, 40 Below is a headbanger and Last Call is more Aerosmith. The Dogtown Shuffle is a contender for favourite for me, with a stripped back Bon Jovi feel and it balances well with the thunderous “It’s Showtime” that follows it. Round out the album with Drop in the Bucket, which shows off the guitar twiddling of Jason Becker at its best.

My favourite track on the album though is Sensible Shoes. The second single, it’s the now expected departure from the rock norm on his album. David Lee Roth at his jazzy bluesy best with twangy guitar and wailing harmonica. It’s just a real shame MTV were prudish about the video.