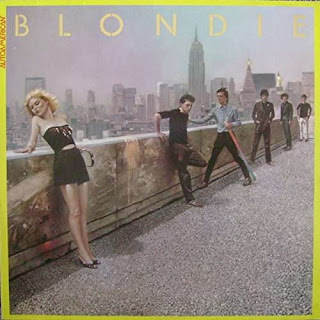 Inspired by our series of articles looking back at music released 30 years ago, Jimmy Hunter takes a step further back in time to give us a Song of the Day 1981. This week, he's in raptures...
Around this time two years ago (1979), a post punk/new wave group released a single that would be a surprise smash, aptly timed disco hit. The construction and reconstruction of that single took weeks. And the group has done it again, in kind of the same way. This week, dear pop-picker, I’m rapturously listening to ... well... Rapture, by Blondie [oh stop it – Ed].

Like Heart of Glass, Rapture existed on a successful album released the year before and the album version got attention. When you listen to the album the single comes from, Autoamerican, as I have done several times recently, you hear echoes of the group’s punk past, so not quite the same as Parallel Lines then, yet similar in concept.

Again, different mixes were used for the 7” and 12” versions except that outside of the USA, the 12” was completely remixed with an extra verse and more overdub in the longer instrumental. The 7” was an edit of this new mix while the US 7” and 12” releases were from the original album version. We’ll stick to the UK versions but do listen to the album version for a comparison. No, I don’t know why – ask Mike Chapman.

Every time I’ve sat down to write this and listen to the record, I end up not writing anything. I started this 5 days ago!! It captivates me too much so I’ll stop daydreaming and write. From the drum intro then the synth’d bells, to the bass, oh the lovely hooky bass, carrying us through verse and chorus to most famous part of this record – the rap. Fab 5 Freddie is actually a visual artist and linked to some very iconic names. “Flash is fast, flash is cool” is a reference to the famous hip hop artist Grandmaster Flash: unlike Fab 5 Freddie, Flash didn’t show up for the video shoot so he’s replaced by none other than Jean-Michel Basquiat (behind the record decks)!

Unlike (or perhaps, like) HoG there is not a crescendo, but I find it somewhat mesmeric. A great record and a very well constructed and infectious record. See for yourselves, the official video is here

And, as an extra treat (because we ALL NEED A TREAT!!!), for those wanting to, have another boogie to Heart of Glass here.
Image - Amazon
Email ThisBlogThis!Share to TwitterShare to Facebook