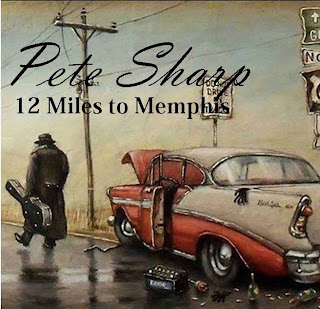 Singer/songwriter Pete Sharp has released a new single from his upcoming album 12 Miles to Memphis. Have a listen to The Ghost of Knightstone Pier...
A Somerset-based singer/songwriter and live performer, Pete Sharp's latest solo project blends the cool sound and vibe of the Rockin’ scene (Rockabilly, Blues & Roots) with other genres such as Americana, Country, British Folk and Rock.
Pete explained “The concept of this project is to mix the use of vintage guitars, amps and microphones seamlessly with today's computer based recording systems and come up with something original”.
The result is a fusion of retro and modern that is both instantly familiar and at the same time fresh and individual. His new song The Ghost of Knightstone Pier, taken from the forthcoming album 12 Miles to Memphis, is one such marriage that has been going down a storm at gigs and festivals across the South of England as well as breaking further afield, thanks to social media.
For the album, Pete has written all his own music and lyrics as well as arranging, producing, mixing and mastering - a necessity in these times of Covid restrictions. Pete added, "All of the vocals are performed by me, as are nearly all of the instruments, although there are a few select special guest musicians that have recorded their parts remotely because of the social distancing rules and I have added their bits later by electronic wizardry!"
On why he chose this particular track to be a single, Pete said “The Ghost of Knightstone Pier is a catchy song that will hopefully have you dancing around your kitchen or with us at a gig somewhere once we’re allowed back out to play. It simply exists to make people feel good.”
The Ghost of Knightstone Pier is now available for download and will definitely raise your spirits [I see what you did there - Ed] during this challenging lockdown period.
In addition to his solo projects, Pete currently works with two other bands - Oblivion, a Rock covers band, established in 1996, and Irie Fire an 8 piece originals Reggae band. Pete said, "Because of Covid-19 the live music scene has been decimated and we have lost all of our gigs except two. One of which is Irie Fire supporting Aswad on the 10th July at the Cheese & Grain, Frome which should be a lot of Reggae fun." Go along and support them if you can.
Pete Sharp's album 12 Miles to Memphis will be out later this year to stream or download online & at gigs on CD & vinyl. Buy or stream the single The Ghost of Knightstone Pier HERE.
Email ThisBlogThis!Share to TwitterShare to Facebook