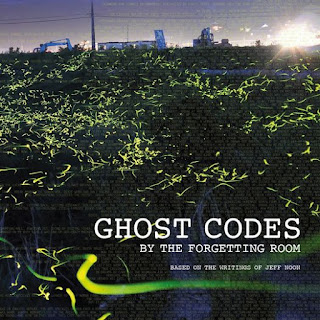 With the album being released on limited edition coloured vinyl, thanks to Shed Load Records, Steve Taylor-Bryant takes a step back in time to remember The Forgetting Room and Ghost Codes...

EXTRACT FROM GHOST CODES 002 by Jeff Noon
“Scanning for signals in darkness, for voices in static drift.
Hearing only the song of ghosts as they spark across circuits.
Name of planet: unknown. Ship destroyed. No signs of life.
Twin moons: one bone white, the other blood coloured.
Our captain buried the crew, then killed himself.
Patterns of rain across the curve of my visor.
Alone now. Battery low.
I am the last of the mechanisms. The coded remains of Planet Earth.”
It is incredibly hard for me to review this album. Whilst I am very excited that the album is making its astonishing vinyl debut courtesy of Shed Load Records, I am tinged with sadness that one of the projects leading guys, and my friend, Jonathan Taylor is no longer around to see how his project is still going, still entertaining, and still developing. Losing Jonathan was huge for all that knew him, but for me to have had Jonathan in my life at that precisely that time, as my mental health issues were becoming prominent, to have that rock of a guy to explain to me in detail what I was going through, what I needed to do, how it would all be okay and to have that level of faith in me when I had none in myself was priceless.
It was during my recovery and discovery that The Forgetting Room came about, a welcome distraction and a chance for myself and Jonathan to discuss things other than me. One of Jonathan’s favourite authors, Jeff Noon, decided to create the Microspores, 140-character stories, complete stories. Jeff threw out a challenge to have composer contributors write 40 second musical pieces of music to be played alongside the Microspores; many were created and are on the Microspore site to hear. However, the work of Jonathan Taylor and The Forgetting Room were the chosen pieces that Jeff believed could be taken from their 40 second birthplace to a full album, The Ghost Codes another of Jeff’s projects. As someone who is more traditional in his musical tastes listening to something that, to me at least, seemed so experimental was a real joy.

The music is extraordinary from the off and feels like the old build up you had at concerts before the band broke into their new track, some really beautiful yet subtle notes and arrangements lie underneath the intro and the first two Ghost Codes narrated by Mandy Gibson. Then the drums kick in, and the whole thing just goes up a notch. There is some extraordinary instrumentation throughout this as well, there are guitars, there are pipes, keys, so much and yet nothing fighting for attention, it just all shares the space, and the listener is the one rewarded. Every couple of minutes the style changes, or the instruments change, or the emotion changes, or, well you get my meaning. It really is such a wonderful way to experience music, and a new way of experiencing storytelling for me, but it is more than a funky audiobook, it is something new, something great.

There are 10 Ghost Codes in all, and maybe a secret track, and whilst the entire thing is fantastic, I think it is Ghost Code 2 and Ghost Code 7 that I fall back to the most, both very different in style and tone and yet familiar to me, comforting almost.

I am not sure if this article helps you in your decision to take a dive into The Forgetting Room or not, honestly? I feel the pain of losing Jonathan to this day and not sure I am qualified to give an impartial or musical breakdown review of Ghost Codes, but listening back after a few years away has been cathartic, hearing Becky Taylor’s extraordinary pipe playing on instruments I wouldn’t have even heard of without this record, to hear Leigh Stothard on drums again fills my heart with happiness, Hugh Bradley’s bass and Kane Hellewell’s guitars oh so often traditionally used by other bands, are here heroes in the story, the distinctive effects and keyboards of Tom Third adds that film score element that is so intriguing, and of course Mandy’s narration so perfect in pace and tone. The entire record is a journey through the excitement you can create by melding two incredible visions together, it has something for everyone on it, it is held together and driven by my friend. I miss you Jonathan.

Here's Ghost Code 1 to give you a taste of things to come...
Mick Carter 4 · Code 1 M 24bit 96khz -1.0 TP.wav
Email ThisBlogThis!Share to TwitterShare to Facebook