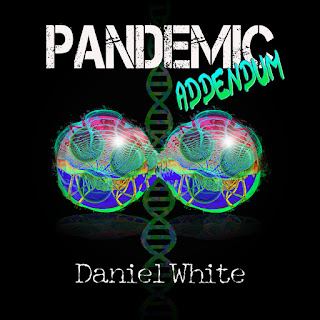 With the fifth album in his Pandemic Trilogy [yes, we got the Douglas Adams analogy too - Ed] now available for pre-order, composer Daniel White takes a look back at what creating the album series has meant to him in a challenging year...
I have always said that Music Is My Therapy, I even have a sign that proclaims exactly that in my recording space (I can't bring myself to call it a recording studio as it's little more than a cupboard) But never more has it been proved than during this past year. When I released War Of The Mind back in January (a collaborative album with the amazing AD Lane) and used my own experiences of battling mental illness I had no idea just how much of a challenge 2020 was going to be.
As the country was pushed into lockdown and the infection rates of COVID-19 increased I decided to create a series of albums which would act as a kind of musical journal for me. I, like many others, found the rollercoaster of emotions that the Pandemic caused exhausting and at the same time pushed me into creative spaces that I hadn't visited before. I really do believe that had I not pushed my heartache, anger and frustrations into musical composition I may not have survived the year. As a Musician I am deeply in touch with my own emotions but I am also exceptionally sensitive to the pain and suffering of others and it was the latter that caused so much of my mental anguish. It wasn't just the pain and loss that became a terrible burden but the betrayal and neglect of the Arts Industry that moved me to rage.
My artist brothers and sisters who give their all to create and inspire have been let down at a time when they should have been protected and supported and I still am deeply saddened by the closure of many Theatres and Arts venues. some of whom will never open their doors again. For us, Creative Free Spirits that we are, it is a necessity of life (on the same level as breathing air) that we allow our expression free rein and the lockdown was not going to stop us. As many artists moved to home recording or online experience and the sheer level of ingenuity and desire to reach audiences developed it is still the fact that you cannot replace the rush and connection of live theatre or music. Whatever the Government may believe, it is impossible to silence us, we just get louder and more belligerent. There is a power in connecting us with one voice and we use music or artistic outflow to resist the dark forces which attempt to snuff out our creative voice. Whilst it is clear that the Arts Industry will survive COVID it will be forever changed but us creatives are a stubborn lot and we never ever give in.

As my Pandemic series developed into a 5 album set (Addendum will be released at the end of January 2021) I realised that my music must always be a carrier wave for my emotions and that, whether negative or positive. it always speaks the truth. I am still learning my craft but my music has an emotional pulse and it is my own. I don't know what 2021 has in store but I don't imagine it will be boring or quiet and I have no intention of not musically expressing my feelings. My music has is full blooded and has a big heart as it is now part of who I am. For those of you who have joined me on this journey, bought my albums or enjoyed my YouTube channel, I want to thank you. There is no higher compliment than to know that I have connected with people and that my creative spark has resonated with you. I have so much more to show you and I look forward to sharing it.