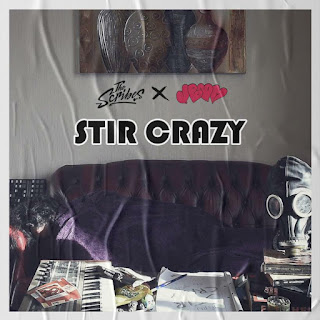 We've been following The Scribes for a while now on AlbieMedia (find some of their previous songs here) so we were pleased to hear they had some new music coming out. Here's what the Press Release for their new single had to say:


Stir Crazy showcases J-Boom's trademark MPC production at its effortless finest, pairing a haunting piano loop with hard hitting drums to create a moody, atmospheric soundscape fitting for these strange times. The incisive vocals, provided by The Scribes alongside dark alter-ego Mr Teatime, talk candidly about the feelings of isolation and helplessness brought on by the various lockdowns of 2020, documenting the artist's creation of an imaginary friend who goes on to take over his mind.

The accompanying music video, with clothing provided by The Scribes' sponsors Aekor Apparel and Bones Clothing, is a strikingly bleak visual telling the story of the track across a day in the life of The Scribes. The sinister presence of Mr Teatime gives the video an edgy b-movie horror feel, perfectly suiting the vibe of the project as whole.

Together the release provides a perfect and entertaining summary of the year 2020 and the claustrophobic environment that the world has suffered throughout the year and is certain to find fans both in the hip hop scene and beyond.

In case you don't know about the band yet, The Scribes are a multi award winning hip hop three piece whose unique blend of beatboxing, off the cuff freestyling and genre-spanning music has created a critically acclaimed live show quite unlike any other on the scene today, with appeal ranging far beyond traditional hip hop fare.

They have consistently proven to be an impressive and engaging live act with festival appearances at Glastonbury Festival, Wilderness Festival, Shambala Festival, Boomtown Fair, Bearded Theory and many more and have toured extensively across the UK and onto Europe.

The band are also proud winners of both the Exposure Music Award's "Best UK Urban Act" and the EatMusic Radio Award's "Best Live Act", and have provided original music for BBC and Channel 4 television, as well as being featured regularly on both national and local radio and media including BBC 1Xtra and BBC Radio 1 Introducing.

The Scribes are hotly tipped as the one to watch, steadily establishing a growing following across and Europe to add to their already significant fan base at home in the UK. [and we heartily recommend them - Ed]
For now, Stir Crazy is available exclusively through The Get Down Records bandcamp from now as a digital download (With instrumental) and as a limited edition double A-Side transparent 7” vinyl with second collaboration track Haunted House Party. It will then be released on all online streaming services/retailers from the 15th of January.
Image & info - The Scribes
Email ThisBlogThis!Share to TwitterShare to Facebook