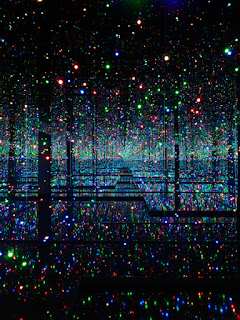 This year-long, focused exhibition showcases these much-loved works by one of the most celebrated artists working today. Yayoi Kusama: Infinity Mirror Rooms is a rare chance to experience two major installations alongside fascinating early documentation of Kusama's experimental performances and events, as well as a brand-new sculptural work that continues the theme of endless replication.

The exhibition features Infinity Mirrored Room - Filled with the Brilliance of Life, one of Kusama's largest installations to date and originally created for her 2012 retrospective at Tate Modern. In this immersive work, mirrored walls and a shallow pool of water endlessly multiply a constellation of tiny, suspended lights to create a feeling of infinite space. This is shown alongside Chandelier of Grief, another whole-room installation in which the viewer disappears into a seemingly boundless universe of rotating chandeliers.

Visitors will also be able to experience The Universe as Seen from the Stairway to Heaven 2021, Kusama's brand new 'peep in' sculpture, which has been created especially for this exhibition. Deploying both mirrors and the colourful 'dot' motif, it recalls the iconic early work Kusama's Peep Show or Endless Love Show 1966. The work demonstrates Kusama's life-long obsession with concept of infinite repetition, exploiting the formal properties of mirrors to create the illusion of limitless space.

An accompanying display of film and photography - some on show for the very first time - provides historical context for the global phenomenon that Kusama's mirror rooms have become today. Photographs by Eikoh Hosoe (born 1933) and the partnership Harry Shunk (1924-2006) and Janos Kender (1937-2009) explore how Kusama subverted the notion of the artist's studio: Hosoe's images show the studio as an almost reverent space that is central to Kusama's unique artistic brand, while Shunk-Kender show Kusama traversing the studio's physical boundaries, the mirrored environments becoming a backdrop for performance, painting, sculpture and fashion design. This theme of the expanded studio is continued in Walking Piece, a slide show made with photographs again taken by Hosoe who captured an early performance of Kusama navigating the desolate streets of New York, an act that highlights her outsider status and feelings of urban alienation. 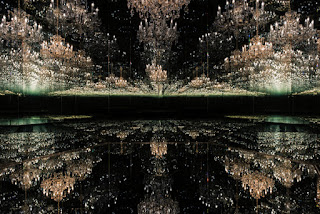 The exhibition also includes recently rediscovered film footage by the British academic John Jones (1926-2010) of Kusama in her New York studio in the mid-1960s - a unique, moving image testimony that records the artist's earliest sculptural works and confirms her simultaneously as a torch bearer for surrealism and an unparalleled artistic force in her own right.

Born in 1929 in Matsumoto, Japan, Yayoi Kusama came to international attention in 1960s New York for a wide-ranging creative practice that has encompassed installation, painting, sculpture, fashion design and writing. The artist has been the subject of monographic exhibitions around the world, including a major travelling retrospective initiated by Tate Modern in 2012, and forthcoming presentations at the New York Botanical Garden and the Gropius Bau in Berlin, both in 2021. Since the 1970s Kusama has lived in Tokyo, where she continues to work prolifically and to international acclaim.

Yayoi Kusama: Infinity Mirror Rooms is curated by Frances Morris, Director, Tate Modern and Katy Wan, Assistant Curator, Tate Modern. The exhibition will be accompanied by a learning programme, as well as community engagement events supported by Bank of America.