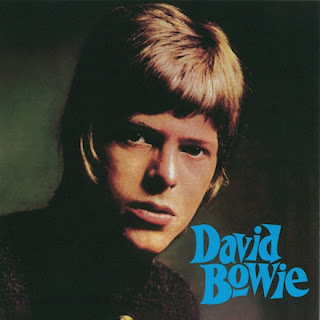 David Bowie's self titled debut album is set for a re-release in January... as a limited edition picture disc...

Deram Records originally released David Bowie's self-titled debut album on June 1st 1967, the very same day as The Beatles' Sgt. Pepper's Lonely Heart Club Band. Whilst it was not a hit at the time over the past 50 years it’s gained a reputation for being a perfect snapshot of the time and has earned plaudits for being one of the first contemporary pop albums to be sung in an English accent. Bowie himself revisited songs from this era in 2000 re-recording the likes of Silly Boy Blue for an album called Toy which remains unreleased.

The album may not have been a huge success but there were music writers who saw something in Bowie, the NME called it “All very refreshing" and that he was "a very promising talent”.

The biography prepared at the time describes David thus "His remarkable powers of observation enable him to write with humour and wit about the people, loved and unloved, and the attitudes, lovely and unlovely, that constitute today's society. A recent bout of 'flu enabled him to pen half a dozen songs to go on a forthcoming Deram LP. In fact, David is one of the very few artists commissioned for an album before a single. Simultaneously, David is writing songs and situations for a colour film in which he is to star and putting the finishing touches to a unique cabaret act”.
When I Live My Dream was a song that was very dear to David Bowie’s heart. Recorded after the body of his debut album was made, he and manager Ken Pitt believed that this would be the song that would turn him into a star. Re-recorded with a string arrangement in the summer of '67 for a potential single , When I Live My Dream featured in Bowie’s 1967 Lindsay Kemp-directed mime showcase Pierrot in Turquoise and again, as the closing number in Love You Til Tuesday. Enjoy it here in fully restored HD 1080.
The album will be released for the first time as picture disc on January 29th and will be made available exclusively here.

DAVID BOWIE - Tracklist [LP Format]:
Side One
Uncle Arthur
Sell Me a Coat
Rubber Band
Love You till Tuesday
There Is a Happy Land
We Are Hungry Men
When I Live My Dream