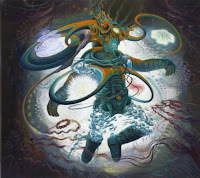 In an effort to further her musical education, Susan Omand has been set "homework" of listening to albums released after the 1980s that she has missed out on. It's a mega final week with the double album of The Afterman: Ascension and Descension ...

Find the full list of albums for Educating Omand: Year 3 here
A double album to finish off this year’s Educating Omand list, Mr Ames? Is that not cheating? Ah, well, at least it is a Coheed double header so I know I’m going to be able to listen to it at least.

As always with Coheed albums there is a story to be told as The Afterman (Ascension and Descension) is a concept album and I had been advised by Mr Ames to seek out the story beforehand. What he didn’t tell me was that the story was a whole freaking BOOK! Yes, never mind your sleeve notes or artistic statements here, we’re talking a 70-odd page hardcover coffee-table book which you can no longer get for love nor money (to be fair I only tried money and not a lot of that). However, the wonder of the internet and a degree in information management meant that I found this page of summaries so I shall be referring to that as I listen to the album. From what I can see so far, the story centres around Sirius Amory, the scientist who explored the Keywork; an astronomical phenomenon that appears on the surface to be a blue amorphous energy cloud but, on his journey into it, Amory discovers that not all is as it seems as he enters into the afterlife.

Let’s go track by track then shall we? Buckle up! Remember this is a double album.


1. The Hollow – This is Sirius getting ready to leave his spacecraft, the Meriwell, and start to venture into the Keywork in his mobile space suit. It’s a very reflective piano/synth instrumental piece of music punctuated by Sirius’ conversation with Allmother his shipboard AI. It sets the scene really well and that computer voice is suitably chilling.

2. Key Entity Extraction I: Domino the Destitute – Stunning guitar intro to this one as the enormity of his journey into the expanse hits him. Then a little unnerving la la la whisper kicks things sideways before the lyrics start to tell the story of Domino, a boxer whose soul Sirius encounters at the start of a vast maze. There are undercurrents of fight commentary and round bells intermingled in the background which adds to the storytelling and a wonderfully percussive explosion at the end.

3. The Afterman – A real change of pace with this one, the title track, and an almost 80’s Del Amitri sound, with soft vocals, plinky guitars and thumpy percussion, as the story flips back to Sirius’ wife Meri (after whom his spacecraft was named) thinks back over their parting for this mission and reads about the explosion. One of my favourite individual songs I think.

4. Mothers of Men – A fantastic heavy guitar starts this track, which has serious shades of prog as it goes on. The echo on the vocals give the impression of going further into the maze and the soundscaping at the end of the track is wonderfully disorientating.

5. Goodnight, Fair Lady – How Thin Lizzy is this one?! He even sounds like Phil Lynott with the staccato treatment to the vocals. The style really suits the story of this one, as Meri heads out to the pub to try and get past the fact that Sirius has been missing for six months now. Another contender for favourite but that’s not really on its own merits, more because of the band it reminds me of.

6. Key Entity Extraction II: Holly Wood the Cracked – The atonality of the start immediately puts you on edge and you know that Holly Wood is not going to be the most sane and stable character for Sirius to interact with in the maze. The music goes very hair-metal before background static, industrial noises, shrieks and explosions cause a wonderful disorientation.

7. Key Entity Extraction III: Vic the Butcher – we leave the celebrity madness of Holly Wood only to come face to face with the military might of Vic. The percussion gives a very regimented sound to the music and the screaming guitars over marching drums mid-song are highly disturbing. The sudden drop back to the computer reading life-signs with light arpeggio piano is an intense counterpoint.

8. Key Entity Extraction IV: Evagria the Faithful – The lift at the start of this one is beautiful. There’s a slight buzz in the background though that keeps you on edge just enough not to be lulled into the sense of enveloping security that Evagria seeks to evoke. The organ lends an air of psychedelic prog as the other instruments shimmer Sirius into a utopic stupor. A slight turn to the minor key at the end hints that the darkness isn’t far away though.

9. Subtraction – the final song on the first album, a complete contrast to the richness of Evagria, has tinkling lightness and clarity of nirvana, reflecting the clarity experienced by Sirius as he realises and reflects upon what the afterlife actually means for him. 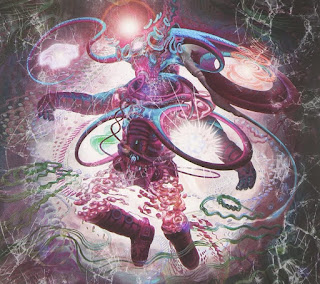 And then, having suitably ascended, we start into the Descension

1. Pretelethal – This is an incredibly Tommy-like track. The almost whispering voices that fire around the speakers and repetition in the lyrics serve to reintroduce the bad into the good with the return of the lost souls looking for Sirius.

2. Key Entity Extraction V: Sentry the Defiant – help is at hand as Sentry, one of Vic’s foot soldiers comes to the aid of Evagria and Sirius and there is a battle fought. The solitary guitar riff gives the music a real spaghetti Western feel as you wait to see who will come out on top in the gunfight. An abrupt shift to the mothership trying and failing to reconnect to Sirius with the final phrase of do you want to go home implying that connection has been re-established.

3. The Hard Sell – with Sirius’ return and debrief the music gets grounded in reality again with a solid rock track. There are still hints of what he experienced, told in the guitar solo, and again there’s an unsettling nature to the backline implying all is not totally well. This is exacerbated by the bubbling circulating distorted voices at the end of the track.

4. Number City – The first few words of this song tell of a medical emergency and the driving drums and siren like brass convey the urgency before morphing into real sirens as the story tells of a flash-forward to the aftermath of a tragic accident and Sirius trying to make some semblance of order out of what happened.

5. Gravity's Union – back to the present and there’s antagonism and darkness in the thunderous guitars reflecting the storminess of Sirius and Meri’s relationship since his return from the Keywork made him famous. That’s not the only secret that comes out though and the arpeggiating guitars add anxiety before the squeal of feedback and discordant guitars give way to the slowing beep of a life support machine.

6. Away We Go – these beeps and alarms are added to at the start of this track as Meri drifts in and out of consciousness. There’s a lightness to the song though and you get the feeling her unconscious dreams are happy ones as she finds herself at the doors of the maze to the afterlife, destined to become another of its lost souls.

7. Iron Fist – Birdsong and acoustic guitar start a very reflective song as Sirius is released from hospital. The happy bounciness of the melody belies the darkness of the lyrics as he tries to comprehend the loss of his wife.

8. Dark Side of Me – The disbelief of the last track drops into a melancholy in this song that builds musically as Sirius rails against everything that has happened. There’s an overwhelming sadness in the solo piano near the end.

9. 2's My Favorite 1 – the final song, and a feeling of hope with the upbeat tempo, tinkly piano and bright guitars. The story tells of Sirius reconnecting to his ship’s mainframe with a view to heading out into the Keywork maze again to search for Meri. The drop into light music-box style piano at the end tells us that he gets there but leaves the outcome hanging beautifully, like walking through a door to the unknown.


The thing I love most about Coheed’s concept albums is that they are basically operas by any other name. You have the recitative tracks (to drive the plot along) and the arias (to emphasise a point or a character). The songs stand up well individually too, although I do think that Mr Ames was right and you get so much more from listening to the album as a whole and reading the story along with to get the full effect. Think of it like listening to a film soundtrack album – once you’ve seen the film and can put all sorts of levels of context and mental pictures of specific scenes around the music that you are listening to, you get a lot more from it; you understand the why as well as the what.

So yes, Mr Ames, you can definitely call me educated this time. This is an album to which I will return when I have the time and energy to devote to it. It’s hefty, sometimes hard going, often existential and challenging in many different ways, but it’s a great listen.
Images - Amazon
Email ThisBlogThis!Share to TwitterShare to Facebook