Turn That Noise Down - The Sisters of Mercy 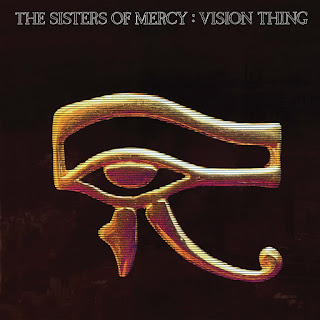 So many well-known albums turn 30 this year and Steve Taylor-Bryant and Susan Omand travel back to 1990 to revisit some of the sounds of their youth that made parents shout "Turn that noise down!" This week, Steve has a Vision Thing...

I’m not sure why it took me until later in my life to listen to The Sisters of Mercy. Maybe I was too young at first? Or distracted by my other tastes? Anyway, The Sisters of Mercy came to me in my early 30’s and I was pretty astonished at what I heard to be honest, it was exactly the kind of music I loved. I really enjoyed the previous pair of albums, Floodland slightly more than First and Last and Always, but with Vision Thing there was much more of an industrial sound, it was heavier and dare I say a more serious release. Whilst anyone I speak to about Sisters wax lyrical about More, which was apparently the huge single I missed first time around, or Something Fast, it is Detonation Boulevard and the title track Vision Thing a berating of George H W Bush that I go back to the most.

If you go looking there are no more albums; after a dispute with Time Warner and issues between Andrew Eldritch and just about anyone he worked with, The Sisters of Mercy were done. That is both a shame, as I genuinely want to hear more, or a genius move as they are a band that will never get worse release after release as many bands do. I have no problem with artists continuing to tour despite no new material, if I did I wouldn’t have seen Billy Joel so many times, and I can only hope that once the world becomes a slightly safer place I get the chance to see the touring band live. Until then there’s three great records and a couple of real stand out tunes.