Turn That Noise Down - Iron Maiden 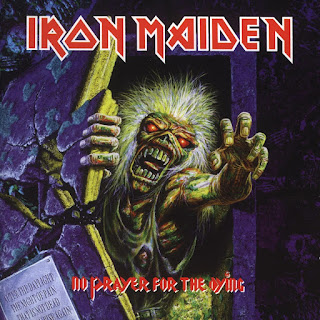 So many well-known albums turn 30 this year and Steve Taylor-Bryant and Susan Omand travel back to 1990 to revisit some of the sounds of their youth that made parents shout "Turn that noise down!" This week, Steve has No Prayer for the Dying...

Something weird happened in 1990. New bands were hitting the ground running and becoming almost overnight successes but older more established bands were struggling to find a place in the market and shifted styles ever so slightly to chase sales but actually lost the place they actually had. The biggest example of that was No Prayer For The Dying by British kings of heavy metal Iron Maiden. The preceding album, Seventh Son of a Seventh Son, had been a smash hit commercially and showed a band at the top of their game with epic masterpiece after epic masterpiece and a cohesion that can only come from the band members working and writing as a tight unit. With No Prayer, whilst not a bad album per se, there was no epicness to be found. I think the departure of Adrian Smith as lead guitarist had an impact, he and Steve Harris had been the steering wheel keeping Maiden on course, and certainly it would be easy to blame Janick Gers as many fans did, but I just think the band as individuals had different journeys they wanted to make and maybe this was one album too far.

No Prayer For The Dying was still highly listenable, certainly more so than Bruce Dickinson’s Tattooed Millionaire which was a travesty and an assault on music, and No Prayer certainly had a couple of highlights. Tailgunner was probably the most fun I had listening back to the album again, Bring Your Daughter to the Slaughter was okay and familiar and Mother Russia was pretty good but the rest I just don’t care about, and that shouldn’t happen with music. It should be love or hate, strong opinion versus strong opinion, an album of apathy is almost criminal.
Image - Amazon
Email ThisBlogThis!Share to TwitterShare to Facebook