Turn That Noise Down - Cinderella 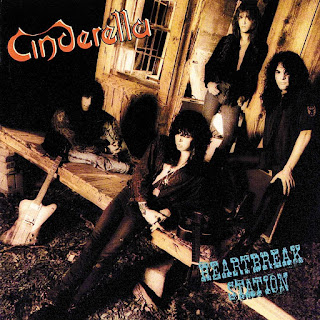 So many well-known albums turn 30 this year and Steve Taylor-Bryant and Susan Omand travel back to 1990 to revisit some of the sounds of their youth that made parents shout "Turn that noise down!" This week, Steve takes a trip to Heartbreak Station...

There were a few bands that completely owned their little sections of hairspray rock in the late 80’s and early 90’s. Bon Jovi had the permed hair Uber stadium thing, and if you don’t think the permed hair was important you don’t remember when Jon debuted his new haircut on Keep the Faith, Poison had the whole kings of make up taken care of, Guns n Roses were the most dangerous band on the planet and Mötley Crüe were doing their bit to keep drugs off the streets by taking all of them themselves. This left very little room for anyone else to come in and make a mark. Skid Row were kind of managing, due to a public row with Bon Jovi and a friendship with GnR, but nobody else was really breaking through. However, that doesn’t mean that there wasn’t some good stuff out there, albeit a little too much the same as what came before, and this is where we find Cinderella.

Cinderella had started in the glam hairspray era but slowly edged towards blues. A huge hit from 88’s Long Cold Winter album entitled Don't Know What You’ve Got (Till It’s Gone) brought Tom Kiefer’s distinct vocal into the mainstream so I was quite excited in 1990 for Heartbreak Station and perhaps a bluesier edge. To be fair, the album was a good slice of blues rock but it was a little Aerosmith-lite.

The More Things Change opens the album in a slide guitar bluesy style and is probably the best song on the record. The next few tracks, Love's Got Me Doin' Time, Shelter Me, and the titular Heartbreak Station, are all a good listen but the album in its entirety, despite being good, leaves me with a sense of “I’ve heard this before”. It’s part early Cinderella, a huge dollop of Aerosmith, and a sliver of a band trying to find their place in an overcrowded market that, unbeknownst to them, was only a few years from crumbling away as grunge took on the world.

Cinderella were never as bad as people remember, they sold millions of records and, listening with hindsight, it’s a lot better than I remember too. And there’s nothing wrong with sounding like Aerosmith.