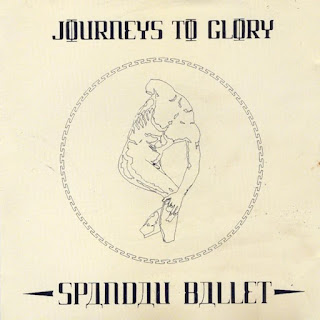 Inspired by our series of articles looking back at music released 30 years ago, Jimmy Hunter takes a step further back in time to give us a Song of the Day 1980. This week, it's apparently a long story...

We’re about to enter a new era, dear reader. There may have been a few false starts but here we are – the start of the New Romantic onslaught. Don’t get confused between this and New Wave, don’t assume New Wave music is always the output of New Romantics, or a heavily made-up eye will roll and a “tut” will emit form the most perfectly drawn lip.

Well, To Cut A Long Story Short … 😏 see what I did there? … yes, I’m listening to the first entry into the Hit Parade by Spandau Ballet. For those unaware, they did actually name themselves after the prison in West Berlin that held Rudolph Hess.

Briefly, the New Romantics was a club culture/club scene thang and the music was derived from punk and European dance/disco music. What started at the Blitz Club in London’s Soho burgeoned into mainstream popularity over the next couple of years and the associated music become very mainstream too. Although specifically about Boy George, you can experience the birth of the movement in this excellent 2010 biopic Worried About The Boy

This record though, is good and what I always found extraordinary, or odd, was Tony Hadley’s vocals – very smooth and cultured for this genre yet it worked. Probably because the construction of the tracks was so good and this was down to the writing and the producing. Richard James Burgess produced the band’s first 2 albums but, much more than that, was claiming world firsts in digital sound making with his compositions and programming on the Roland MC-8 and the Fairlight.

It’s not a complex piece yet it has key disco/dance elements: a galloping bpm of over 140 and a simplistic synth keyboards providing smooth and hooky melody. Although it’s repetitive, Hadley’s vocal rides atop the music and gives it, well, soul. No harmonies, no over-produced-trying-too-hard sound, just a few good chords put together which when lodged in your brain, was difficult to remove.