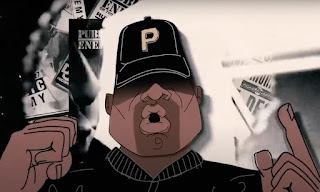 Public Enemy shares a throwback-filled animated video for their latest single. Listen to Public Enemy Number Won and see how much nostalgia you can spot...

The track, which features contributions from Run-DMC, as well as Mike D and Ad-Rock of the Beastie Boys, is the latest track to be released off their new album What You Gonna Do When the Grid Goes Down?

“The song is a homage to ‘Public Enemy No. 1’ and that moment in time,” Chuck D said in a statement, referring to the group’s first single from their 1987 debut album, Yo! Bum Rush the Show. “The Beastie Boys and Run-DMC were playing it all the time and Rick Rubin kept coming at us to sign with Def Jam. So it’s my way of bringing it all back together again.”

And "bring it all back together" they did as, released in September, What You Gonna Do When the Grid Goes Down? marks Public Enemy’s 15th studio album and their first LP back with Def Jam since 1998’s He Got Game. The album also features an all-star cast of guests, including the likes of YG, Ice-T, Nas, and The Roots’ Black Thought and Questlove.

The video for Public Enemy Number Won also features classic posters, photos and footage as backdrops to the animated versions of the crew delivering their rhymes. The video ends with a tribute to the late Run-DMC member Jam Master Jay and Beastie Boys’ MCA.
Image - Def Jam/YouTube
Email ThisBlogThis!Share to TwitterShare to Facebook