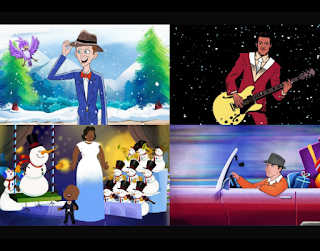 Bing Crosby, Chuck Berry, Ella Fitzgerald & Frank Sinatra usher in the holidays with some newly created animated videos for some of their biggest holiday hits...

This holiday season, musical legends Bing Crosby, Chuck Berry, Ella Fitzgerald and Frank Sinatra are returning in animated form with the first-ever official music videos from UMe for some of their most iconic and beloved songs in the Christmas canon.
In the beautifully hand drawn and painted videos created by Fantoons Animation Studios, Crosby brings joy to a down in the dumps town with his trusty Bing-O-Matic™ in “Winter Wonderland” and croons over a multigenerational military family’s holiday gatherings in “White Christmas,” guitar-clad Berry helps Santa with his Christmas rounds in vintage comic book style in “Run Rudolph Run,” Fitzgerald and Frosty delight in a winter wonderland storybook setting in “Frosty The Snowman” and Sinatra delivers mid-century style, glitz and grace as only he can in the holiday classics, “The Christmas Waltz” and “Mistletoe and Holly.”

“UMe is incredibly honored and excited to partner with these legendary artists and estates to celebrate their iconic holiday songs and give them official videos,” says Bruce Resnikoff, President and CEO of UMe, the global catalog company of UMG. “Last year was the first time we created holiday videos and we had such a tremendous response that we’ve gone all in again this year and our content team and Fantoons have really outdone themselves. These songs are some of the most popular year to year and we hope these videos brighten up fans holidays as well as attract new audiences across the digital platforms they inhabit. Similar to before, the video assets and creative will be deployed across UMe’s holiday marketing and advertising campaigns for a cohesive look and feel and to achieve greater engagement across a broader audience.”
MARY CROSBY OF THE BING CROSBY ESTATE said “Keeping dad's spirit alive, especially during the holidays, is not only of huge importance to us as a family, but to everyone. During these trying times his voice gives hope and comfort to all of us. I am thrilled that there is another way dad is being seen and heard. I love the videos Universal came up with and, of course, love his music! Dad believed supporting the troops was one of the most important contributions that he made in his life. When he was asked about his career it wasn't his awards or the fame that came his way, it was that ‘in some small way, if he made the life of a soldier a little bit easier then, that was what mattered. The video for ‘White Christmas’ is a wonderful tribute to his love and appreciation for the troops.”

CHARLES BERRY JR. OF THE CHUCK BERRY ESTATE said "What an honor to have ‘Run Rudolph Run’ given such a dazzling visualization as its first music video! The marriage of animation and music could not be better – you can’t beat flying reindeer, Santa Claus and electric guitar! My dad always told stories in his songs and his poetic skills are on full display here. The lyrics tell a Christmas story that young and old can’t help but enjoy. Fun, frolicking and certainly perfect for the season, it was a holiday favorite in our house and we hope this video for a timeless Chuck Berry song brings joy and helps people get in the spirit this holiday season.”

RICHARD ROSMAN AND FRAN MORRIS ROSMAN OF THE ELLA FITZGERALD FOUNDATION said “Since it was released 60 years ago, Ella Fitzgerald’s Ella Wishes You a Swinging Christmas has remained a perennial and beloved standard for the holidays, livening up countless festivities and family gatherings with its joyful and jazzy takes on Christmas classics, including the swinging ‘Frosty The Snowman. The Ella Fitzgerald Estate is thrilled to partner with UMe to bring Ella and Frosty to colorful life in this fantastic, beautifully animated video and hope that both Ella’s fans and the new generations just discovering her music will love it. What a wonderful gift for the song and album to receive as it celebrates its 60th anniversary!”

NANCY SINATRA OF FRANK SINATRA ENTERPRISES said “I really think he might be the voice of Christmas. I just think that the sentimentality of my dad’s recordings is what grabs people. He was emotional when he sang them, and people are emotional when they hear them. That doesn’t really change."

In addition to the new animated videos, a variety of “Christmas With…” collections for artists including The Beach Boys, Bing Crosby, Brenda Lee, Burl Ives, Chuck Berry, Dean Martin, Ella Fitzgerald, The Jackson 5 and Nat King Cole are available to stream from UMe and there’s, of course, the annual Christmas Music playlist which features some of the most popular songs and artists across the holiday music canon, pairing timeless classics with contemporary favorites.
The hours-long –and ever-expanding – playlist is available to stream now: https://Stream.lnk.to/ChristmasPR

Image and info - UMe
Email ThisBlogThis!Share to TwitterShare to Facebook