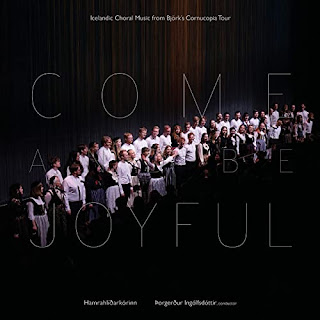 The Hamrahlíð Choir has released Cosmogony, the first single from their upcoming album Come and be Joyful...


Who are they, you might ask. The Hamrahlíð Choir is from Iceland and consists of alumni of Menntaskólinn við Hamrahlíð (Hamrahlid College) in Iceland who were formerly members of The Choir of Hamrahlid College. And that's where Björk comes in. Yes, Björk was a member of the choir as a teenager, and as a result has been a long-time collaborator.
Written by Björk and Sjón, Cosmogony is an entirely acapella work which was first performed by the Hamrahlíð Choir at the premiere performance of Björk’s critically acclaimed Cornucopia show at The Shed, New York, last year.

The album Come and be Joyful features Icelandic folk songs along with two collaborative Björk covers - Cosmogony & Sonnets, based on Björk’s own arrangements. The album is built out from the choir’s phenomenal support set at the Cornucopia live shows, with additional tracks added following the end of the tour.

As such a fan of the choir’s work and completely unique sound, Björk began her collaboration with The Hamrahlíð Choir in 2017, singing on her album Utopia, and had all 52 choristers accompany her around the world to perform at every live show during the Cornucopia tour. This collaboration continued with concerts including those at The Shed, New York City, in May and June 2019.

And here's the original Björk version for comparison