News - Yoshiki: Under the Sky 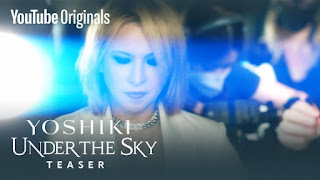 One of the most influential composers in Japanese history, Yoshiki has sold a combined 50 million albums and singles worldwide as a solo artist and as leader of the stadium-packing rock group X Japan. His works span multiple genres, including rock, pop, classical, and film. [Read Susan's review of the band's documentary We Are X here - Ed]

He has composed the theme for the Golden Globe Awards, a concerto for the Emperor of Japan, the theme for the world's most popular animation series, Attack on Titan, and more. Recently, Yoshiki collaborated with St. Vincent. He also joined Bono, will.i.am, and Jennifer Hudson on the song "#SING4LIFE”.

“We as artists only exist because of our fans,” says Yoshiki. “Together with amazing friends, I want to lift people's spirits. Even though we faced obstacle after obstacle as you see in the film, we made it happen with maximum care and love for everyone. We’re still in the middle of everything in terms of the final cut, but very excited that we finally could announce this amazing event. Thanks to fans, friends, staff, Youtube Originals, and everyone involved.”