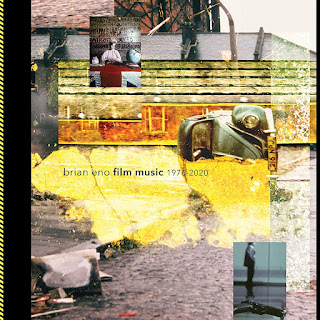 Watch the video for Brian Eno's latest single ‘Decline and Fall’ – a video that was personally commissioned by Eno and taken from his upcoming album, Film Music 1976 – 2020, released this Friday, 13th November...

"Decline and Fall" originally featured in Eno’s original score for the movie ‘O Nome da Morte’. The film was directed by Henrique Goldman who was therefore a natural choice to direct this new video. Showcasing Eno’s skill in augmenting the moving image, the video is a stunning marriage of cinematography and sound, contrasting intrigue, shock and beauty in a timely metaphor of our relationship with the Earth.

On working with Brian to produce the short film, Henrique said “It was a tantalising challenge to direct a visual track to resonate with Brian Eno’s expansive and multi-faceted musical universe. Like a riddle made of sound, Decline and Fall is mysteriously eclectic and hermetic at the same time. It’s beautiful and accessible, but also dense, deep, poignant and thought-provoking. As a lifelong fan it was a daunting prospect that kept me awake for several nights particularly as this is Brian’s first official music video."
Goldman continued “Our video juxtaposes two cinematic narratives set in Brazil, one of the main frontiers in the final battle between Man and Nature. The first comprises fragments of a drama about the tortured soul of the assassin portrayed in ‘O Nome da Morte’, and the second depicts a magical natural phenomena – the Invisible River of the Amazon – a meteorologic process on a colossal scale, whereby rainforest trees continually spray billions of gallons of water into the atmosphere.

"The video is foreboding and suspenseful. Somewhere in the vast Brazilian landscape, something momentous lurks in the background. An unforeseen, greedy and merciless force disrupts the divine stream of life. The same force drives the hitman, who stealthily steps out of the shadows to kill for money. As rain and fire, fiction and science, birth and death, nature and civilisation, art, love and greed continually juxtapose each other, we become aware of the delicate natural balance that is being severely disrupted by our civilisation.”

Brazilian born and London based, Goldman has directed, written and produced several award-winning features, including the internationally acclaimed ‘Princesa’, which premiered at Sundance Film Festival 2001, won the Best Film Award at the Out-Fest in 2002 and is one of the most watched Brazilian feature films on YouTube, with over 7 million views. His feature ‘Jean Charles’, premiered at Toronto in 2009 and won the Best Screenplay Award at the 2009 Dinard Film Festival. Through his production company Mango Films, Henrique has both directed and produced a string of documentaries for international broadcasters including RAI (Italy), Channel 4 (UK) and Globo Network (Brazil).

Eno’s long-standing affair with film goes all the way back to 1970 with his soundtrack to Malcolm Le Grice’s short experimental film ‘Berlin Horse’. In 1976 he followed this with ‘Sebastiane’ and a long forgotten Greek b-horror film, ‘Land Of The Minotaur’ aka ‘The Devil’s Men’. This led to an unstoppable momentum largely initiated by the release of his 1978 studio album, ‘Music For Films’. Early classic Eno film moments include ‘Prophecy Theme’ from David Lynch’s ‘Dune’, ‘From The Beginning’ from Dario Argento’s ‘Opera’, ‘Force Marker’ and ‘Late Evening In Jersey’ from Michael Mann’s ‘Heat’, ‘Under’ from Ralph Bakshi’s ‘Cool World’ and his moving cover of William Bell’s soul classic, ‘You Don’t Miss Your Water’, in Jonathan Demme’s ‘Married to The Mob’.

‘Music For Films’ was a loose compilation of material recorded between 1975 - 1978. It was intended as a conceptual soundtrack for imaginary films and only the closing track, ‘Final Sunset’ was written for an actual film. It proved to be a fruitful project with nearly every piece on the album going on to be used in future films, including several of Derek Jarman’s, the remake of Jean-Luc Goddard’s ‘Breathless’, John Woo’s ‘A Better Tomorrow’, ‘Rock ‘n’ Roll High School’ and Todd Hayes’ ‘Safe’.

Eno again explored this approach with U2 as ‘Passengers’ on their collaboration album, ‘Original Soundtracks 1’. Four of the tracks from the album were used in films prior to release: ‘Beach Sequence’ and ‘Your Blue Room’ in Michelangelo Antonioni’s ‘Beyond the Clouds’, ‘Miss Sarajevo’ in an eponymous documentary about a beauty pageant held in the midst of besieged ‘93 Sarajevo, and ‘One Minute Warning’ in Mamoru Oshii’s Japanese animation classic, ‘Ghost in the Shell’. Another track, ‘Always Forever Now’ later appeared in ‘Heat’.

In the mid-seventies Eno began a rich and rewarding collaboration with British film maker, Derek Jarman, who initially commissioned him to record ‘Final Sunset’ for the closing scene to his first feature film, ‘Sebastiane’. The collaboration continued all the way through until Jarman’s untimely death in 1994. Including the several tracks in ‘Sebastiane’, this collaboration resulted in Eno’s music in four of Jarman’s films, including ‘Still Water’ and ‘Dover Beach’ in ‘Jubilee’, ‘Blue’ and the entire score of the autobiographical ‘Glitterbug’ – his final film.

‘An Ending (Ascent)’ and ‘Deep Blue Day’ are taken from ‘Apollo: Atmosphere & Soundtracks’, Eno’s collaboration with his brother Roger Eno and Daniel Lanois. The music was originally written for Al Reinert’s landmark documentary of the Apollo moon landing, ‘For All Mankind’ although since then ‘An Ending (Ascent)’ has taken on a life of its own and is now remembered just as much from Steven Soderbergh’s ‘Traffic’, Danny Boyle’s ‘28 Days Later’ and Miguel Arteta’s ‘Beatriz at Dinner’. It even made an appearance in the 2012 London Olympics opening ceremony. And then there’s ‘Deep Blue Day’, which will forever be identified with Ewan McGregor’s legendary toilet dive in ‘Trainspotting’.

Aside from ‘Glitterbug’ and ‘For All Mankind’, Eno has also provided complete scores for a number of other films including his work with Jon Hopkins and Leo Abrahams on Peter Jackson’s ‘The Lovely Bones’. More recently he has scored Henrique Goldman’s atmospheric Brazilian serial killer biopic, ‘O Nome da Morte’ aka ‘A Man Called Death’, Gary Hustwit’s spotlight on pioneering industrial designer Dieter Rams, ‘Rams’, and his latest, a documentary film on long-time friend and associate, Stewart Brand, ‘We Are As Gods’, which will have its public premiere in early 2021.