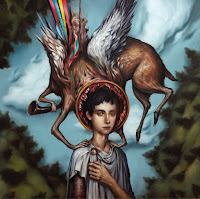 In an effort to further her musical education, Susan Omand has been set "homework" of listening to albums released after the 1980s that she has missed out on. This week she hears a lot of Blue Sky Noise...

Blue Sky Noise by Circa Survive caused me a lot of problems… no, not problems, it’s more of a frustration. I wanted to get on with it, I really did, Mr Ames usually doesn’t steer me wrong and there’s always something to hook into that I could appreciate, if not actively enjoy. Yeahhhh, no. Not this time. I’ll try to explain in my track by track notes, written on first listen:

Strange Terrain – a catchy main theme with some interesting woozy instrumentation near the end. BUT, and it’s a big but, I really cannot stand the vocals – the falsetto grated and I almost gave up on the whole album on the first playthrough of this first song because of it. However, I plough personfully on because I feel had to give it the benefit of the doubt.

Get Out – the vocals are more to my taste on this one and it’s a track that reminds me, in some ways, of Wolfmother’s The Joker and The Thief; not in rhythm or subject, but more tonal quality. And I like the guitar break. It’s ok.

Glass Arrows – An interesting start with multi-layered guitars providing a surprisingly sparse undercurrent to the vocal (I’ll shut up about the vocals now, as they seem to have sorted themselves out so I’ll just class track one as an aberration and ignore it). The drumming on this, when the backline does kick in, is seriously superb but the song is completely ruined for me by The Pink Floyd Wall-esque kids choir shouting thing in the middle. I mean, WHY is it there? Also, the end sounds like the weird sci-fi B Movie bit in Britney Spears’ Oops I Did It Again. Make of that what you will.

I Felt Free – More excellent drums and twangy guitars, redolent of Big Country et al. This morphs into a sixties/seventies sounding rock sound, simple melody, thumping drums, proggy keys, and reminded me of The Who in a lot of ways, not just because of the title of the song. Not bad.

Imaginary Enemy – I love the growly bass at the start of this and it successfully bubbles under throughout. It’s the kind of song that, I feel, would work better live as it has an anthemic quality about the chorus. Again there’s a good guitar solo in this, not overly twiddly, and it’s solid commercial pop rock.

Through the Desert Alone – Oooh, finally, this is interesting. Very Cult sounding intro – She Sells Sanctuary, that kind of thing. As it goes on though, despite sparks of appealing bass meanderings, it doesn’t really live up to the promise of the start for me but it’s ok.

Frozen Creek – A complete change of pace on this one as it’s time for the acousticy ballad-ish on the album. It does develop and beef up a bit as it goes on but never quite soars or connects as much as I feel it should. Probably more my fault than the song’s.

Fever Dreams – This track had me smiling from the start. This is what I’m looking for with this band’s supposed sound. Spanish guitar, counterpointed rhythm, siren-like wails, all fitting the vocal. It’s interesting, intriguing, keeps changing but doesn’t lose it in the middle. Favourite track on the album.

Spirit of the Stairwell – I adore this title, it conjures up all sorts of imagery. A very psychedelic sound to the woozy guitars and nice to hear a non-falsetto vocal on this, with interesting harmonies. Thanks to good old Wikipedia, I found out that Paul Simon is listed as one of the influences on the band and I can really hear it on this one, it’s very Simon and Garfunkel. This is not necessarily a compliment though.

The Longest Mile – Back to the upbeat pop-rock with this one, it’s the kind of song I can see 1990s U2 doing. This is also not necessarily a compliment. It’s ok, filler-y but nothing too special.

Compendium – Well, it’s short. It’s got that going for it, but I don’t really think it added anything and I had to go back and listen twice because I thought I’d missed it the first time.

Dyed in the Wool – Aaaand the annoying grating vocals from track one are back. And so is the kids’ choir from track three. The Hawaiian guitar saves it from being totally awful but it’s a very disheartening way to finish an album otherwise.

Welp, that’s 50 minutes of my life (52 if you count the fact that I listened to Compendium twice) that I won’t get back. I’m afraid I couldn’t face the extra 30 minutes of remixes on the deluxe version so just went with the original cut. I was going to say the album was ok, just a bit bland and none of the tracks quite live up to their initial promise, but then I thought, no. It’s not OK. Aside from a few sparks of interest – good percussion and a solid bass, and the track Fever Dreams which I did enjoy, I am disappointed in this album. I feel like I’ve missed something, there should have been some reason that this was on my Educating Omand list but I just can’t find it. Sorry Mr Ames sir, not educated this time.
Image - Amazon
Email ThisBlogThis!Share to TwitterShare to Facebook