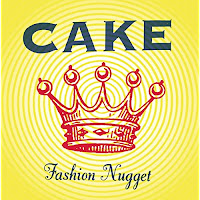 In an effort to further her musical education, Susan Omand has been set "homework" of listening to albums released after the 1980s that she has missed out on. This week she digs up a Fashion Nugget...

Find the full list of albums for Educating Omand: Year 3 here
Cake. As Donkey from Shrek is fond of saying, “Everybody loves Cake”. And, having listened to their album Fashion Nugget, I do too… well, nearly. And, it will always only be nearly, because they commit the ultimate sin on this album and I’m not sure that I can forgive them for that…

But I’m getting ahead of myself here. Cake. The coincidence [Gibbs’ rule 39 – Ed] isn’t lost on me that I wrote about an album called Cake by a band called the Trash Can Sinatras recently and now here I am writing about a band called Cake, whose first track on the album is called Frank Sinatra! I know, right?

But I’m getting ahead of myself again. Cake. Not a band I had ever heard of before now. Doing a bit of a read up about them before I headed into the album, the wiki page told me “The band has been noted for McCrea's sarcastic lyrics and monotone vocals, and their wide-ranging musical influences, including country music, Mariachi, rock, funk, Iranian folk music and hip hop.” Alrighty then!

As I said before, track one is Frank Sinatra and it immediately made me sit up and take notice for two reasons. Firstly, I had heard this song before! After a quick dig on the afore-mentioned wiki page, it was used in an episode of The Sopranos to great effect. Music to steal newspapers to, indeed. Secondly, an incongruous keyboard intro, thumping percussion and smoky brass that leads into the most amazing bass guitar riff and singer John McCrea’s voice is incredible. It’s difficult to describe, you really have to hear it.

The Distance is next, with whistly synth, driving guitars and an almost rap-like vocal from McCrea. The jazz style brass is a surprising addition but it works amazingly well. A very cool track.

Friend is a Four-Letter Word nicked its guitar intro from The House of the Rising Sun but, apart from that, it’s a beautifully slow, very dark track. I’m happily getting used to the mariachi brass splashes now and they are truly brilliant, especially when coupled with twangy guitar and a painfully sixties Hammond organ sound.

Open Book is a change of pace again, the deliberately dissonant (or just aggressively out of tune) plunky guitars really wrongfoot you but don’t distract from the story-telling style of the lyrics and the disharmonies in the vocals are stunning. This really is atonal in every sense.

The walking tinkly piano riff in Daria is a superb topend bass-line letting the lower instruments carry the melody. Again, it’s got a very sixties feel for me – Beach Boys or late era Monkees (this is a good thing) – psychedelia with added shaker.

The short and sweet Race Car Ya-yas is probably my favourite track on the album. It’s Nillson’s The Point with balls. Literally.

I Will Survive. That’s not an inspirational affirmation, or a statement of feeling at the midpoint of the album, it’s the name of the next track and it’s exactly what you think it is – a marvellous cover of the Gloria Gaynor megahit, like you’ve never heard it before. So bloody cool!

Perhaps, Perhaps, Perhaps – yes another very cool cover. This song has been covered by everybody, and I mean everybody. From Bing Crosby to Doris Day, Andrea Bocelli to Il Divo, Geri Halliwell to the Pussycat Dolls? Yup. So you will know the song and I really like this version of it, with the ubiquitous mariachi brass very much inkeeping this time, as it was originally a Cuban song with Spanish lyrics.

It's Coming Down has the most glorious discord at the start and, again, a beefed up sixties sound comes forth – think The Byrds’ Eight Miles High and you have the idea.

Nugget is still very hippy at the start, some of the best use of the vibra-slap that I’ve heard in a while might I add, but this time, alongside the brass there is an almost beat poetry reading of the lyrics interspersed with funk-filled vocal harmonies and tinkly piano. It sounds a mess but it really isn’t.

She’ll Come Back to Me is so country that it even has a pedal steel guitar in it. I love the bass guitar in this, so much so that I had to listen a few times to take in the rest of it. Add in an almost Elvis Costello vocal and it’s marvellous.

Italian Leather Sofa is the second last track on the album and probably the closest to a properly nineties song on there [this album was recorded in 1995 – Ed] and very reminiscent of the Rembrandts or the Mavericks at the start (unless you listen to the lyrics – I was shocked, I tell you!). It also has the most astonishing jazz trumpet solo in the middle that just completely blew me away. Stunning.

So, from what I’ve just written it sounds like a brilliant album, doesn’t it? It’s definitely one I will listen to again and again, so you can count me as educated this time… what? I haven’t mentioned the final track on the album? Yes, you are darned right I haven’t and there’s a very good reason for that; it’s the reason why this album is only very nearly brilliant. You see, I saw the title of the last song and balked - they wouldn’t have. Surely. I had to play it once, just to confirm my darkest fears… oh, they so did. So now there is an unwritten rule that the final track on Fashion Nugget will forever more get skipped. Why? The song is called Sad Songs and Waltzes. Yes, they did it, THEY DARED to cover a Willie Nelson song. How could they?! Bastards!
Anyway, here's Frank Sinatra.
Image - Amazon
Email ThisBlogThis!Share to TwitterShare to Facebook