Turn That Noise Down - Daryl Hall and John Oates 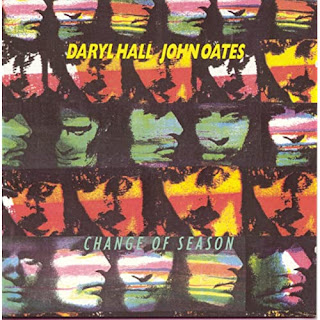 So many well-known albums turn 30 this year and Steve Taylor-Bryant and Susan Omand travel back to 1990 to revisit some of the sounds of their youth that made parents shout "Turn that noise down!" This week, Susan has a Change of Season...

Daryl Hall and John Oates had been part of my music collection for about 10-ish years by 1990, when this album came out, but their back catalogue stretches almost decade further back than even that so, on reflection, I guess it wasn’t a surprise that they had tired a bit of the “pop” scene after 20 years and wanted to get back to basics with Change of Season.

And what a change it is. If you only know their music from the 80s, you’ll be used to their synthesiser heavy hits like Private Eyes and Method of Modern Love or the commercial pop funk of Out of Touch and I Can’t Go For That (No Can Do). This album is not any of that so, naturally, it fell a bit by the wayside for their fanbase at the time. What this album is, though, is a slow burn of close harmony soul music, with a sprinkling of gospel organ and acoustic country guitar twang thrown in. The main single and opening track off it, So Close, was “polished” in production by Jon Bon Jovi, one of the co-writers, and you can really hear his influence on it although, to my ear, the acoustic version that closes the album is musically more interesting. The Motown influence is more to the fore with Starting All Over Again, which could so easily be a Smokey Robinson song, and Sometime a Mind Changes starts with the same chord progression as Sittin’ on the Dock of the Bay and it settles you into some smooth easy listening. Never guitar-laden, the instrument is used to highlight rather than carry the melody on most of the songs, that is a task given to keyboards of various ilks, and there’s some interesting texture added by strings, both orchestral and blue-grass to songs like Halfway There and Only Love respectively. Where this textural nuance fails down though is with the sax solo at the start of Give It Up which immediately dates the song, making it sound more like the Moonlighting theme than anything more “serious”.

I think Change of Season was maybe a change too much for some of the fans, as it ended up being the final studio album for Daryl Hall and John Oates on the Arista label and their final album (excluding greatest hits) for several years after that. That’s not to say it was a bad album though and I think, listening back to it now, that I appreciate it a lot more than I did back then. It’s a “grown up” sound and a hint of things to come as well as a reminder of seasons gone by.
Image - Amazon
Email ThisBlogThis!Share to TwitterShare to Facebook