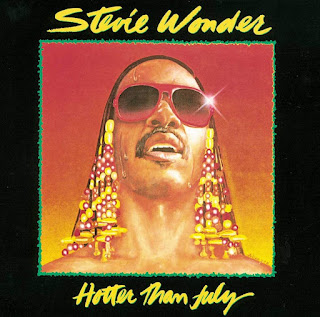 Inspired by our series of Turn That Noise Down articles looking back at music released 30 years ago, Jimmy Hunter takes a step further back in time to his favourite albums from 40 years ago. This week on TTND80, it's Hotter Than July...

You may think that when I review an album I know, the process of putting an article together is either easier and or quicker. Mostly it’s neither: regardless of how familiar, or not, I am with the choice, the same consideration is given. Agreed, the enjoyment factor may differ, but the process is the same. Happily, for this selection, the enjoyment factor is huge. What can I say about this album that hasn’t been said before [Er, hopefully something!! – Ed]. It’s a Master(blaster)piece of Motown disco and R&B – yup, I’m chair-dancing all the way through Stevie Wonder’s Hotter Than July.

Kicking off side 1 is Did I Hear You Say You Love Me? A fast paced, very definitely pop track that’s perhaps not “trademark” Stevie Wonder but listen to the instrumentation and the bass line and you’ll find Stevie in there. It has a good, hooky melody that has nothing to do with the vocal yet the vocal is carried along by the music rather than the music being driven by the vocal. Trademark Stevie? The only off-putting thing about it is how it suddenly segues into the next track.

All I do is another up-tempo track but with a much more soul/R&B sound. This track has some history attached to it as it was written by Wonder when he was a teenager and recorded originally by Tammi Terrell in the ‘60s. Terrell’s version was never released until an anthology appeared in 2002 containing it. There’s a selection of the great and the good of the genre providing backing vocals, though you’d never know, but all in all it’s a good track with Wonder’s vocal adlibs keeping it from being repetitive as it heads to the fade.

Now then, decide for yourself which is possibly better.

I’m not and never have been impressed by the next track – Rocket Love. There’s something about chords that remind of a ‘50s/’60s B-movie incidental moozak and I find it very off-putting. And dull. Listening to it now after a very long time I’m both surprised and delighted that the same feelings about it are evoked. NEXT!

Next indeed – and one of the two stand out tracks, for me at least, of the album – I Ain’t Gonna Stand For It. As the guitar and low, gravelly vocal kick the track off you might be forgiven for thinking that it’s “Willy Nelson does disco” yet going into the chorus it becomes pop, the guitars and synths punctuate the vocals delightfully. The frequency off the bass on this track is very evident, quite a remarkable achievement for the recording engineer and as the track goes into the “repeat to fade” section we hit a crescendo … yet it’s not a fade, it’s an instrumental section.

As If You Read My Mind has a b-side sound to it yet it does stand on its own feet – however the frenetic drums rather spoil it. That said, I’m not sure how that could change without changing the track completely.

Side 2. Well now I really go all fanboy because just listening to the intro and I have goosebumps. Reggae to a disco beat may not sound like a winning combination but please, if you’ve never listened to this track, you do need to hear it. The drums, the bass, the organ and then the trumpets sing out a melody that’s pure Bob Marley inspired brilliance. Marley is indeed mentioned in the first verse and there’s good reason – they’d met and performed together a year before and this track is clearly a tribute to Marley. I wouldn’t normally do this but I decided to include the lyrics to the 3 verses here. Why? Well, with all the hatred so far in 2020, 1980 and the troubles we had then seems like several lifetimes ago and the lyrics to this record sit squarely in the BLM movement – a delightfully musical FUCK YOU to the haters.

I tried very hard, very hard indeed to not make side 2 track 1 the highlight but it’s difficult not to because I feel very strongly that it’s a voice from the past that’s been ignored.

Do I Like You starts quite delightfully with a thumping beat and bass and a recorded conversation between Wonder’s young son and daughter. Autobiographical maybe? Hinting at a child prodigy dancer, perhaps reflecting his own prodigal youth? The beat and bass remain largely unchanged throughout yet the key change and vocals for the chorus take the track away from just another pop track. There’s something in the percussion that reminds me of Michael Jackson’s Don’t Stop Till You Get Enough.

Cash In Your Face starts off smoothly with a good melody and keeps an even keel all the way through. So even, in fact, that seemingly from nowhere it fades out. There’s nothing wrong with the track but it doesn’t stand out. It’s like the music you’d here in a film between speaking parts, like when someone is driving somewhere to do something. I do think it’s a good track but it’s an odd fit with this album. Yet the same could be said of all the tracks. Maybe.

Lately I have had the strangest feeling … Well, it’s true. Lately is the kind of slow track I’d normally scorn, yet there’s something about the way this track is constructed and sung that doesn’t push me away. It’s fairly simple: Stevie singing at the piano but the melody is catchy and his vocal is tremendous. You may never hear me say that about another “smoochy”.

Happy Birthday. Well it’s legendary, this track. If you didn’t know, it was written in celebration of Martin Luther King and part of a huge attempt to get King’s birthday secured as a US national holiday. This eventually happened for the first time in 1986 but it’s the lyrics of this track that are important, just as with Master Blaster. Is it a protest song? Yes, most definitely but a very softly spoken one. It comes with a production, a vocal, a melody and bass line that together make a very good record in itself.

This album for me is Stevie Wonder, if not at his best, then certainly equalling the talent on display that brought him fame to begin with. It’s superb album and yet after this he was never able to recapture this level of creativity and subsequent releases were, by comparison, limp.