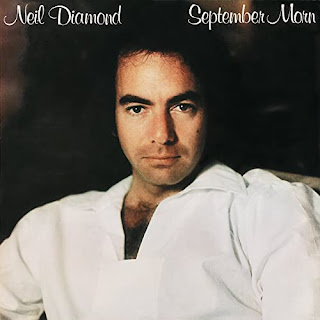 Inspired by our series of Turn That Noise Down articles looking back at music released 30 years ago, Jimmy Hunter takes a step further back in time to his favourite albums from 40 years ago. This week on TTND80, he remembers September Morn [in October? - Ed]...

The “cool kids” would scoff at the thought of listening to this record. But I wonder how many of those allegedly “cool kids” have listened to a record, enjoyed it and never realised that it was written by Neil Diamond? Or even listened to a “classic” Neil Diamond record and enjoyed it – perhaps when played at their parents’ Hogmanay party, for example.

I’ve never been a fan, around a decade or so ago I was glued to the BBC’s transmission of “Hot August Night” – a documentary around Diamond’s return to the Greek Theatre in L.A. with footage of the original 1972 concert. So, thinking of what albums to feature in the TTND80 slot, I thought I’d pick September Morn, as I do remember a couple of tracks from it.

The album was somewhat overshadowed by the release of the 1980 film and album The Jazz Singer and I think that’s a shame. Although recorder in 1979 and released in December of that year, I picked September Morn for this article because I just think it’s a better album. In the same way the soundtrack to Xanadu far excels the film it’s taken from, The Jazz Singer can be listened to and enjoyed without having to endure a gawd awful film. Those points notwithstanding, I don’t think TJS is as good.

Kicking off with the title track, you may be forgiven for thinking that’s it’s “classic” Neil Diamond – a ballad. A ballad it is, but I wouldn’t call it “classic Diamond”: it’s a good track. The melody along with his vocal is complex and though it might play to a tried and tested formula, he seems to add pathos to his voice whilst singing about an estranged couple who’ve met up again. The formula is the (disappointing) key change towards the end.

Next, Mama Don’t Know starts full of promise and, don’t get me wrong, I think Diamond’s vocal on this is superb. As is the track itself. But as a devout atheist a theme starts to fascinate me – there are a number of (organised) religious themed tracks on this album. But I think these are born of his dislike of organised religion battling with the fact that he is himself, a deeply religious man. Or at least this is what he said when he announced in 2005 that he’d “found God”.

That Kind is musically a nod to his past style – or indeed, his style. It’s a lament to all of those girls / young women who fell through the cracks in an attempt to find fame and in the process, lost their lives. In today’s somewhat PC world, I find the bluntness of the lyrics refreshing. You get the impression that this is something of a protest song and that he did/does care – and I believe that.

Jazz time is a track I do like – if anyone tells me this track is boring and repetitive then they risk being tutted at! It’s as the title suggests – a little jazz number that’s jumpy and toe-tappingly satisfying. No, not pure jazz in its purist sense, but a good number.

The Good Lord Loves You hits you starts by addressing those on the margins of society and tells them that the Lord does indeed love them. Perhaps because they’ve been abandoned by (organised) religion. But for my money it’s one too many songs on a religious theme for a pop record yet the vocal is good and the sentiment in the lyric is sincere. There is almost a military band style drum to this and I can’t help thinking of Onward Christian Soldiers.

We start side 2 with a rehash of Dancing In The Street and having no memory of this I desperately wanted to hate it. I was sadly disappointed. It starts oddly but develops into a nice little R&B-type affair which is rather pleasing and he does it well. The mid instrumental section where he improvises is peculiar but nonetheless it’s not as bad as it could possibly have been.

The Shelter of Your Arms starts off soothingly, smoothly until a few bars in there’s a key change that pricks you like the unexpected taste of something sour in a sweet pudding. The same thing happens in subsequent verses. I got bored of this no matter how much I tried but every time I heard that key change I winced. It’s a song about the trials and tribulations of fame but by the time I got to the end of the song I couldn’t have cared less.

In order to be as objective as possible I tried listening to I’m A Believer (this version) several times and regretted it more each time – this Monkees’ song does not work in a faux reggae style and should never have been attempted.

And I’m afraid the same the same goes for the next, 3rd, rehash: The Sun Ain’t Gonna Shine Anymore. Had Diamond actually run out of steam and just didn’t bother writing any songs for this album?

Stagger Lee attempts to tell a story in a way that artists like Fairport Convention are masters of. Musically it’s very engaging but the lyrics are dire. In fact, this started with so much promise, by the time I got to the end I was so irritated by the lyric, all enjoyment of the music itself had almost, but not quite, evaporated.

I’m glad I listened to this, several times in parts, because I really wanted to connect with it – to feel the monumental talent that had gone into earlier albums but I just did not get that at all. Shame. His success waned (or rather fell off a cliff) after this and in 2005 he found God and released rehashed versions of his own songs in an attempt to discover a new, younger audience. Sadly a few years ago he announced that he’s living with Parkinson’s and then withdrew completely. I do genuinely send him good vibes because his music has done that for me – but sadly none of it is on this particular album.
Image - Amazon
Email ThisBlogThis!Share to TwitterShare to Facebook