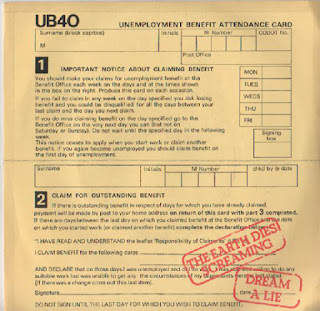 Inspired by our series of articles looking back at music released 30 years ago, Jimmy Hunter takes a step further back in time to give us a Song of the Day 1980. This week, he fills in his UB40...
“Oh not another protest song” I hear you cry. Well this one can’t be helped, but with this one, protest is implied with everything the band did – early on, at least.

This week I’m in a post-apocalyptic world with UB40 performing The Earth Dies Screaming. The third single, it ended up not being an album track and I think was a good follow up to two top five hits, though not quite as big a seller. Though the band may have been protesting, and indeed this record gives all of them writing credits, it’s a fine example of the reggae sound that they were/became famous for.

And it’s no small wonder. A simple composition (numerous writing credits notwithstanding) and with a few instruments typical of the genre, a good melody emits from the speakers carried on a strong bass punctuated by some good squeaky keyboards. Because this is far from over-produced you get all of the instruments, loud and clear.

I’ve always been fascinated by Ali Campbell's vocals – there’s not much range; not much variation but somehow, he seems to convey the emotion of the song rather well. Though I wouldn’t say I’m a “fan” of the band, I do like a lot of what they released, especially the first few years (up to Red Red Wine but let’s not go there).

Though we know the band was anti Thatcher and anti right wing (the name comes from the form you had to sign at the time in order to claim unemployment benefits: Unemployment Benefit form 40) we do need to remember that the band formed in 1978, 18 months before the Tories gained power. A time when unemployment was at a record high (it would go much higher).

All in all, this anti nuclear song is a good record with a great reggae beat and I hope you enjoy it.