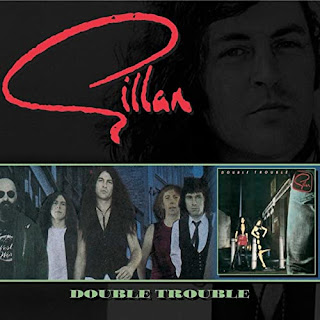 Inspired by our series of articles looking back at music released 30 years ago, Jimmy Hunter takes a step further back in time to give us a Song of the Day 1980. This week, he's looking for Trouble [he's come to the right place - Ed]...
Now then. Before you start tutting and telling me what I’ve said about what I like and don’t like, remember that all these articles are not only about what I like, they’re also about challenging oneself in terms of genres and what may have been previously liked, or otherwise. I like to think that in some cases I’m doing an Educating Omand with this stuff, though perhaps not as succinctly.

All of that notwithstanding, I can’t stand this record [Er, so why are we here then??? – Ed] but it’s always fascinated me, hence the article. This week I’m swinging my head and banging my non-existent air guitar [no, you’re really not – Ed] to Trouble, by Gillan.

I was never an Elvis fan but I have always appreciated his legacy and his amazing voice. Ian Gillan’s voice too, on this record, is really quite remarkable and that’s what makes it stand out – it’s just not like any Deep Purple record I’ve ever heard. He applies a heavy metal vocal to a rock’n’roll record and it’s fascinating.

The plethora of guitars, heavy metal guitars, not normally found anywhere near a record like this almost suggest, well, a kind of comedic sarcasm, but it actually works. The melody floats on a wave of sheer metal and Gillan’s vocal guides it all the way through and though not necessarily his trademark shriek, you can tell underneath that trademark shriek there’s a set of very cultured vocal chords.

I’ll never say I like this record but I won’t ever stop saying it fascinates me. Have a look at this live performance from 1980 and judge for yourselves. Listen to the live vocals and the guitars, not arranged and produced in a studio and still oozing quality … and a certain arrogant style.
Image - Amazon
Email ThisBlogThis!Share to TwitterShare to Facebook