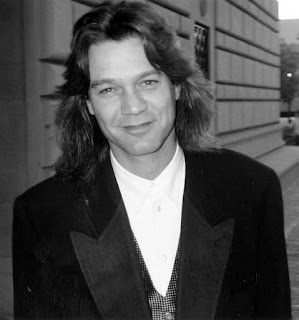 Another guitar hero heads for the great gig in the sky with the death of Eddie Van Halen, announced yesterday. Susan Omand turns up the volume and cries...

Van Halen. Man, where do you even start? For me, I was 15 and it was their chart hit Jump from the album 1984, strangely enough released back in 1984 when Top of the Pops was still a thing, and I fell in big love with the big ego that was Diamond Dave. But there was also this guitar sound, this AMAZING guitar sound with Van Halen that, once I dug past the showmanship of their front man, made the hairs at the nape of my neck stand up and I was utterly enthralled. This was Eddie Van Halen. My god, he was good. I devoured everything I could find of theirs immediately, from the eponymous debut album back in 1978 through their three studio albums until Diver Down from 1982 and I played all six albums pretty much continually for a year until the needle wore out on my record player. Yes, they did actually wear out.

Eddie Van Halen could make a guitar make noises that have never been heard before or since. Yes, you have the virtuosic shred that everyone is used to, best shown off in Mean Street (Fair Warning). But there's also the stunning acoustic techniques in Spanish Fly (Van Halen II) , the almost sci fi sound he conjured up in Cathedral (Diver Down) the sizzling blues of Ice Cream Man (Van Halen) and the almost jazz-like time signature changes in Hot For Teacher (1984).

Then David Lee Roth left the band, Sammy Hagar joined and I, I'm afraid to say, kind of let Van Halen fade into a nostalgic memory for the next 10 years or so, because I disliked Hagar's work so much, and it's only been in the last few years that I've returned to dig back through the albums that passed me by in that time.

But it's back to their very first album for my choice of a song to remember the genius of Eddie Van Halen with, the most epic guitar solo ever and a reminder of Van Halen's great legacy for the ages. Get yourself a cuppa [or raise a glass - Ed] and let your ears erupt to this 13 minute-long live performance from 1986.