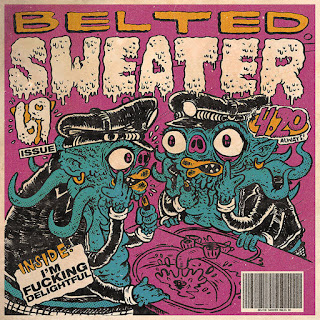 With his debut album coming out on 4th December, listen to Belted Sweater's first single from it, Fem Top...

A couple of days ago we received a completely unsolicited email. Normally these just get ignored [no they don't - Ed] but, for some reason, this one stood out.
Maybe it was the backstory of "I've played drums in a bunch of LA punk/math/synth/metal bands (Letting Up Despite Great Faults, The Littlest Viking, Wizzrobe) and finally decided to make a super gay solo record after a melodramatic breakup."
Or maybe it was his artist's bio:

Belted Sweater is the solo project of Los Angeles based drummer Christopher Patrick Gregory. His debut LP, I’m Fucking Delightful, sounds like what if Henry Rollins was in the Pet Shop Boys but with live drums and even gayer lyrics, chronicling terribly humiliating Grindr hookups and free clinic visits; basically Blood on the Tracks in the age of anonymous Craigslist encounters. He tracked all the instruments himself, like a moderately chubby amalgam of late period, leather daddy Trent Reznor and Dirty Mind-era Prince, using acoustic drums, synths and hoarse shouting.

Or maybe, just maybe, it was the incredible album artwork above.
But, whatever the reason, we decided to make Fem Top our Song of the Day for today.

Find out more about Belted Sweater at https://www.beltedsweater.gay/