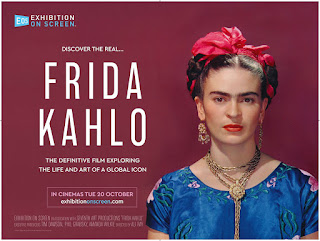 In select cinemas from tomorrow, Tony Cross watched the art documentary Frida Kahlo thanks to Exhibition on Screen...

This documentary about Frida Kahlo, directed by Ali Ray, is part of an ‘Exhibition on Screen’ strand. I have to confess this is the first one I have seen so I have no idea whether this is the standard way they structure such programmes but it works pretty well as a combination of actual art exhibition, focusing on several works in more detail, and biography.

I enjoyed it, but that is because I adore Frida Kahlo’s work and have been fascinated by her as a person for quite a while. Her life is a fascinating one and her art is incredibly personal, which is something that this film does a good job of conveying.

Kahlo’s life was really changed after she survived a terrible accident, when the bus she was on was hit by a tram. The film lists her injuries, and it sounds like something from a film about Evel Knievel. It seems that after this she was never not in pain and she needed regular operations, but by the end of her life she was only able to paint by strapping herself into her wheelchair. At the last exhibition of her work in Mexico City they had to bring her in her bed to the opening night. But still she painted.

She also fell in love with Diego Rivera. Rivera was a great artist in his own right, specialising in murals.* He was also a large man. When Kahlo and Rivera got married Kahlo’s mother described it as ‘a marriage between an elephant and a dove.’ Rivera was also – like many artistic men – something of a lothario. There marriage was difficult and complicated. Neither of them was faithful. Apparently, Rivera was less bothered about Kahlo’s affairs with other women but did not like her affairs with other men. But it does seem that Kahlo genuinely loved him, even unto her death, regardless of how he behaved. That love – and Rivera himself – is visible in her paintings. However, I felt I could judge Rivera harshly towards the end of her life. The excuse that the artist is focused on their art above all other things, which makes terrible – usually male – behaviour seem OK is hard to justify when the woman who loves you is in incredible pain and using drugs and alcohol to help numb that pain.

But somehow, despite all this trauma, Kahlo managed to produce astonishing artworks. She was only 47 when she died. 47. One of the talking heads in the film makes a strong point that perhaps only Kahlo, Rembrandt and Van Gogh manage to make their self-portraits stand out as something greater than simple portraiture. And as you see her paintings on the screen and various people discuss them you can see that this may well be true. Kahlo’s self-portraits do not seem to be just exercises. They are personal and painful. 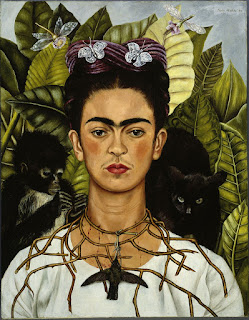 So, the documentary does a fine job of putting Kahlo’s art in context, although the focus is on love rather than politics – which does get a mention. There is a brief mention of Kahlo as a queer artist, but that is not dwelt on. Her role as a woman artist is there, but it often seems reflected through the prism of Rivera. That may or may not be fair.

It is not the most revolutionary of documentaries, which perhaps I really noticed because I recently watched Caroline Catz’s Delia Derbyshire documentary which does much more with the form to tell the story of a female artist and her struggles.

This documentary is made for Sky Arts, straight down the line academic talking heads stuff. It is a guided tour through an exhibition by people who know what they are talking about, which sounds like I am damning it with faint praise. Which I am. I enjoyed it because I am fascinated by – and probably a little in love with – Frida Kahlo.

Perhaps there is a place for a documentary that takes a more experimental look at Kahlo’s life and work? Perhaps not. In the meantime, this does a solid job. Perhaps there is a part of me that wants documentaries to be made with a view to attracting the interest of those who do not know about Kahlo already. Those documentaries that make you want to go off and discover more about the subject it is covering. Would this do that with Frida Kahlo or is it lecturing to the converted?

Perhaps I am reviewing what I wanted to see, rather than what I did watch. Perhaps I should go and make documentaries myself rather than question what other people are doing.

This does a job.

* This does not do him justice, but we are not here to talk – too much – about Diego Rivera.
Frida Kahlo will be released on 20th October 2020 in over 150 cinemas across the UK including Curzon, Empire, Everyman, Odeon and independent cinemas.