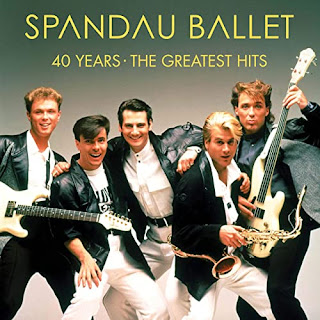 Yes it's true, Spandau Ballet are only a decade away from their golden anniversary!  To cut a long story short, they're celebrating their 40th anniversary with a new greatest hits compilation, out next month according to this communication...
Press Release

Forty years ago this month Spandau Ballet signed their first recording contract and, within that month, had released their first single ‘To Cut A Long Story Short’. The band defined the 80s in the way that The Who defined the 60’s, Bowie defined the 70’s and Oasis defined the 90’s. ‘40 Years – The Greatest Hits’ celebrates both the band’s musical and cultural impact.

The 3CD set features all the hits, fan favourite album tracks as well as classic 12” versions, and a previously unheard version of the Simon & Garfunkel classic ‘The Boxer’ recorded in 1990 with legendary producer, arranger and film composer Michael Kamen.

As the band’s critically acclaimed feature-length documentary ‘Soulboys Of The Western World’ showed Spandau were not just about music, they were the epicentre of fashion, and youth culture, speaking for an audience who previously had no voice.

In the early ‘80’s Spandau Ballet were the In Crowd’s band, they ushered in a new era of visually dominated pop and their mechanical, stylised sound was born and bred on the dance floors of the West End. They were Bowie Kids, Blitz Kids, and white soul boys embracing electronica, frilly shirts and tuxedos.

Spandau spearheaded an era of new pop that was destined to traverse the globe. Along with Duran Duran, Sade, Culture Club and Wham!, as well as dozens of other British groups who grew out of the new romantic scene at the end of the Seventies. By the mid-Eighties Spandau were global superstars.

Spandau became one of the most commercially successful bands of the decade, and during their career they notched up 23 hit singles and spent a combined total of in excess of 500 weeks in the UK charts, achieving album sales of over 25 million worldwide. Some of their songs, like “True”, “Gold” and “Through the Barricades” all written by the band’s songwriter Gary Kemp, have become standards. “True” has now achieved over five million plays in North America alone and “Gold” was the true soundtrack to the London 2012 Olympics

Spandau Ballet originally lasted ten years; a career that spanned the nightclubs of Soho and Ibiza to Hollywood and the stadiums of Europe and Australia. They defined the decade, they came, they saw, they partied, and then they left.

To paraphrase ‘True’ ‘and then they came back again’ firstly with the hugely successful sell-out Reformation Tour of 2009/10 and then once more with the ‘Soul Boys Of The Western World’ tour in 2014.

Side D
1. Be Free With your Love
2. The Boxer
3. This Is The Love
4. Through The Barricades