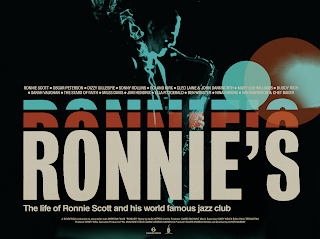 Goldfinch have announced that new film Ronnie’s will be celebrating a nationwide theatrical release via Everyman Cinemas on 23rd October...

Written and directed by Oliver Murray (The Quiet One), with an original score composed by Alex Heffes (Touching The Void, Mandela: Long Walk To Freedom) the film is a celebration of the legacy of Ronnie Scott and his world-famous jazz club.

Ronnie’s explores the club’s 60-year history and shines a light on the uncompromising men and women who built it and who took to its stage. Featuring previously unseen and rare performances from the likes of Dizzy Gillespie, Van Morrison and Chet Baker, Jimi Hendrix, Nina Simone, Roland Kirk, Sonny Rollins, Ella Fitzgerald and Miles Davis.

These are accompanied with new interviews from the likes of Giles Peterson, Michael Parkinson, Val Wilmer, Chris King (son of the club’s co-founder, Pete King) and Ronnie’s daughter Rebecca Scott, as well as interviews with some of the most iconic figures in music; Quincy Jones, Georgie Fame and Sonny Rollins, amongst others.

Ronnie’s is an exceptional story about one of London’s greatest ever institutions – one of the last remaining vestiges of old, bohemian Soho. Chronicling an incredible journey through late 50s and early 60s Soho, the film is not just for jazz fans; it also tells the extraordinary story of how two working-class Londoners (Scott and co-founder Pete King) contributed to the cultural life of a great city, making it a vital social document and a film for any self-respecting music fan.

Ronnie Scott was a lifelong sufferer from depression, very much a taboo subject amongst his generation. The film compassionately tackles this subject with those who knew and loved him speaking eloquently about his illness.