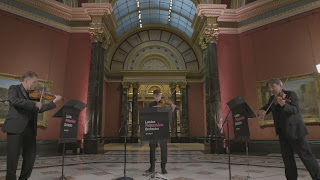 A video recording of the London Philharmonic Orchestra playing in the National Gallery for the first time, filmed during lockdown earlier this year, will be broadcast this Saturday, 10th October...
Press Release

Closed to the public for the first time in its 196-year history, the Gallery in July collaborated with the Orchestra to showcase art and music.

The resulting video concert, the first of four featuring orchestral players in chamber music selected to match the paintings, will be shown tomorrow, 10th October, the anniversary of the first concert performed by Dame Myra Hess, in honour of the pianist who organised the Gallery’s famous lunchtime concerts during the Second World War.

Continuing the tradition of playing a concert for an audience living through a time of crisis, the musicians performed in the Gallery’s magnificent Barry Rooms, the same location as the wartime lunchtime concerts. 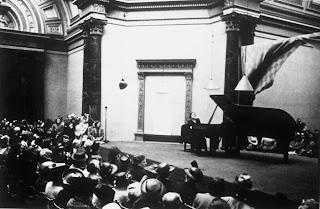 But unlike those concerts in front of a live audience in a picture-less gallery that remained open despite the bombs falling, these post-Covid-19 concerts will be watched from homes.

Music for string players was chosen to match paintings in the Gallery’s collection, inspiring the performers as they played. In the first broadcast on Saturday, Dvořák’s Terzetto in C major, Op. 74 is performed as a response to Two Peasant Scenes by Giuseppe Maria Crespi and Lake Keitele by Akseli Gallen-Kallela.

Later concerts to be broadcast over the next few weeks include Haydn’s String Trio in C major paired with Madame de Pompadour at her Tambour Frame by François-Hubert Drouais; and Dohnányi’s Serenade for String Trio, Op.10 with Velázquez’s The Toilet of Venus and Klimt’s Portrait of Hermine Gallia.

Rossini’s Sonata for Strings is matched with Corot’s Italian Woman, Canaletto’s Regatta on the Grand Canal and William Hogarth’s The Graham Children. 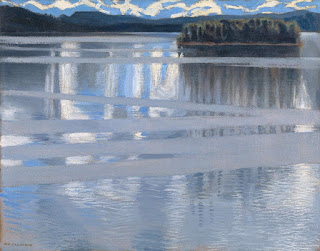 The concert videos include a full performance of each work alongside interviews with the Gallery’s Director Dr Gabriele Finaldi and the London Philharmonic Orchestra’s former Chief Executive Timothy Walker. To accompany the performances, there is also a behind-the-scenes film with interviews with some of the musicians about how the project came to fruition.

David Burke, Chief Executive of the London Philharmonic Orchestra, said "The London Philharmonic Orchestra is thrilled to be working with the National Gallery on this exclusive video series. Inspired by Myra Hess’s lunchtime concerts during the Blitz, we hope this collaboration between two of London’s major arts organisations can bring a moment of musical respite not only in London, but to audiences all over the world."

Dr Gabriele Finaldi, Director of the National Gallery, London, added "Painting and music are the most natural of partners so this is a very happy collaboration between the National Gallery and the London Philharmonic Orchestra. The Myra Hess concerts at the Gallery have acquired an almost mythical status for us and it was music that carried us through the war years. So the opportunity to do something with the London Philharmonic Orchestra during the Covid closure to bring music back to the Gallery and to remember those years when music played such an important role for the population has been an extremely pleasing thing to do."