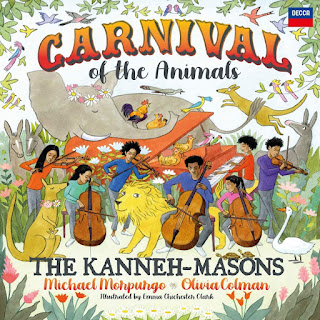 The Kanneh-Mason’s Carnival of the Animals, featuring Michael Morpurgo and Olivia Colman, is set to release on November 6th. Listen to Redemption Song...

Recorded at London’s Abbey Road Studios, the release includes new poems written by War Horse author Morpurgo to accompany French composer Saint-Saëns’ beloved musical suite ‘Carnival of the Animals’. The poems are read by the author himself, joined by The Favourite actor Colman, and guest musicians complete the ensemble for the suite.

Along with Colman’s readings interposing the humorous suite ‘Carnival of the Animals’, which represents different animals through descriptive musical motifs, the recording features Morpurgo’s heart-warming Grandpa Christmas story, set to music for the first time with classic tracks including ‘Dance of the Sugar Plum Fairy’, ‘Flight of the Bumblebee’ and ‘Sea Murmurs’.

Morpurgo reads the role of Grandpa, with the youngest Kanneh-Mason, Mariatu, reading his granddaughter. The album includes a new arrangement of Eric Whitacre’s ‘The Seal Lullaby’ featuring all seven siblings, aged between 11-24. It is also the debut recording for youngest sisters Konya, Jeneba, Aminata and Mariatu.

Also featuring on the album is the Kanneh-Masons’ own arrangement of Bob Marley’s iconic hit ‘Redemption Song’, marking 40 years since its release in 1980 – fewer than five years before the singer’s death. The new music video for the track, filmed at Abbey Road Studios, shows all seven of the siblings – Isata, Braimah, Sheku, Konya, Jeneba, Aminata and Mariatu – performing the work together in their own emotive arrangement that showcases the enduring nature of Marley’s music.

The original song featured on Bob Marley and the Wailers’ twelfth album, Uprising, with key lyrics derived from a speech given by the Pan-Africanist orator Marcus Garvey, "The Work That Has Been Done.” At the time of writing the song in 1979, Marley had been given the diagnosis of cancer that, four years later, would take his life at the age of 36. Marley’s widow Rita later suggested that ‘Redemption Song’ was a conscious reflection on the artist’s mortality.

Last weekend, the Kanneh-Mason siblings also launched a competition in partnership with the Barbican Centre, where they will perform together as a family for the first time on October 22nd in a ground-breaking live and live-streamed event. The competition offers budding young artists the chance to submit their own illustrations on the theme of ‘Carnival of the Animals’. The winner will be chosen by children’s illustrator Emma Chichester Clark, who also created a colourful storybook world featuring vibrant birds, friendly kangaroos, curious elephants and all seven of the Kanneh-Mason siblings – depicted, of course, with their instruments.
The siblings explain, “To celebrate ‘Carnival of the Animals’ and the amazing illustrations that Emma Chichester Clark created for our album cover, we want you to draw your very own carnival of animals! It can be any combination of animals, and you can draw as many as you want, from ants to antelopes, giraffes to jellyfish, xeruses to zebras – anything goes!”

To enter, participants must upload an image of their drawing to www.carnivaldrawingcompetition.com before 12pm EST/5pm BST on October 19th. The winner will be chosen by Emma Chichester Clark on October 21st, with the prize being a signed deluxe CD of the new album Carnival, a ‘House Of Music’ bundle and an online ticket for the family concert at the Barbican on October 22nd. 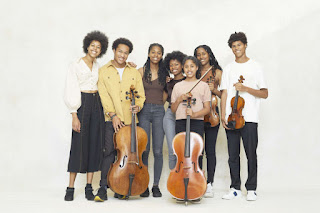 The seven Kanneh-Mason siblings are: