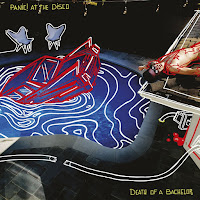 In an effort to further her musical education, Susan Omand has been set "homework" of listening to albums released after the 1980s that she has missed out on. This week she finds life in Death of a Bachelor...
Find the full list of albums for Educating Omand: Year 3 here

Hmmm. This is going to be a difficult album for me to write about. I feel like I know all the songs already because I listen (or at least have on in the background) our local commercial pop radio station a lot these days and these songs have definitely all been given a lot of airplay over the past few years.

Only they haven’t really. There’s apparently only four singles released out of the eleven tracks on the album, so why do I think I’ve heard them all if I’ve never listened to this album before? Let’s go through them.

Next is Don’t Threaten Me With a Good Time, another single, although this was just a promo single rather than a chart release, and a song that annoys me in a couple of ways. Firstly, I always hope it’s going to be Rock Lobster when it comes on the radio, because of that sample at the start. And secondly, I don’t really understand why they thought it needed the B52's sample because it’s a good song anyway and the sample doesn't really add anything to it.

Hallelujah is, yes, another single and it reflects its religious moniker with a strident (although at the same time very disco) trumpet fanfare at the start which then drops into a decent tempo, gospel organ-fest. Also, a good a cappella section.

Emperor’s New Clothes is probably my favourite song on the album, despite the fact it starts like Delilah (the Tom Jones classic) [at least it does on the album version, the official video version below is slightly different - Ed] and is, yes, another single. There’s a lot of musical interest with counterpoint and syncopation and reminds me in a lot of ways of Robbie Williams’ Party Like a Russian, it has that same bombast.

The title track is the next on the list and the final “proper” single from the album. It is SO Frank Sinatra, with its easy listening big band styling, rich vocal and gentle bossa nova beat. This is apparently deliberate though as Sinatra is cited as a major influence by Brendon Urie – singer, songwriter and only original member left of the band.

LA Devotee is next, another song I recognised even though it wasn’t released as a single, and it’s a boppy dance track with a very 80s synth sound which is always a good thing.

Golden Days is the first song on the album (the 8th out of 11) that I can’t absolutely say I specifically remember hearing on the radio but it really does sound familiar. The guitar on this is excellent, with a nicely distorted edge, and it’s a very catchy chorus for a lyrically dark song – again it reminds me a lot of Robbie Williams.

The Good The Bad and The Dirty has a brilliant vocal over an almost sideshow sounding start. The percussion in this is interesting too – again, very Robbie in its execution. I think I see why I find this familiar now.

House of Memories is one of these REMesque incredibly sad songs that you can dance to. I also like the (probably unintended) allusion to OutKast’s Hey Ya and “take my picture, shake it till you see it”. I love the tempo change in the middle too.

Impossible Year rounds out the album and I honestly thought it was a cover version of a much older song but this is by no means meant to be a slight, it is beautiful. It’s, again, so Sinatra in its form and execution, and reminded me of Robbie’s cover of A Very Good Year, written by Ervin Drake in 1961 and a song that Sinatra made his own.

So, yeah, I’ve either heard or thought I’d heard all of the songs on this album without actually listening to the album itself. Having heard it now as a whole, rather than a sum of its parts, it is very entertaining; an album which is as complex as you want it to be with some interesting hidden depths in an easy listening, poppy format. Urie’s voice is highly listenable, without being overtly challenging or jaw dropping, and his song-writing abilities are pretty incredible – being able to make a new song sound like a familiar classic without delving into pastiche or parody is no mean feat. Am I educated though? Yes, I think I am. I've realised that I must like the band a lot because I’ve liked everything of theirs I’d heard in the past, just not put two and two together that it was all them.
Image - Amazon
Email ThisBlogThis!Share to TwitterShare to Facebook