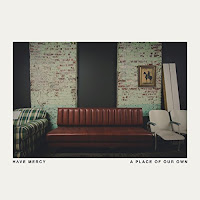 In an effort to further her musical education, Susan Omand has been set "homework" of listening to albums released after the 1980s that she has missed out on. This week she gets a place of her own...

I’d actually heard of Have Mercy and A Place of Our Own before listening to this album but only because Mr Ames (Educating Omand Year 3 tutor extraordinaire) has written about how wonderful it is himself for this very site (Read his article here) so I’m very conscious of the fact I may be stepping on some toes if I don’t enjoy it. However, he asked for it by putting it on my #EducatingOmand homework list for this year so here goes:

The album starts with the really short To Convey and it immediately reminds me a bit of They Might Be Giants with the acoustic start. This soon changes though with a wonderfully heavy guitar-laden chorus and the drop-off at the end back to stripped back, almost a capella, with just acoustic chords is brilliant.

Two Years comes next and it’s a song that, musically would fit so well into the “Scottish New Wave sound” of the late 80s/early 90s – think Aztec Camera and you’ll get the idea. But this all changes with the vocal. I must admit that, on the strength of just these two tracks so far, I completely agree with Mr Ames that singer Brian Swindle has a unique voice. From the lightness of the verse, an unassuming melodic quiet voice that sounds like Green Day’s Billie Joe Armstrong, the growl appears as the volume grows and there is a real power to the choruses, staying just on the right side of “RAAAR” to still carry the melody.

The third song on the album is Howl and again this showcases a different facet to Swindle's voice as it develops a clarity that helps it stand out over a suitably jangly, multi-level guitar background. I think this one was a single, if not it should have been, as it seems to have the album title in the lyrics somewhere.

I do like the guitar in The Place You Love – it’s a lot more defined than the jangliness of the previous song – and bimbles along nicely in a head nodding way. It’s only when you start to listen to the lyrics that you realise Swindle has “done an REM” with this album and put really dark lyrics over happy poppy songs. And I love the vampy wahwah (I know what I mean) [I’m glad somebody does – Ed]  sounding chords in the middle 8.
Pete Rose and Babe Ruth – OK, now I’ve started listening to the lyrics, I’m intrigued to by the title of this one as the song has nothing to do with baseball. Maybe there’s some American urban myth that I’m not aware of involving the two players mentioned. Musically though, again jangly guitars, growly vocal, very pleasant and a very cool, slightly irritating but in a good way, feedback loop at the end.

Spacecrafts marks the midpoint of the album and I’m starting to get used to the REM-esque darkness over a peppy backing now that I’ve noticed it. Something I haven’t mentioned about Swindle’s vocal so far (and it feels somewhat trite but, to me, is very important) is his diction and his ability to make fast, noisy, lyrics still intelligible to the untrained ear.

I love the guitar intro to Plastic Covered Furniture – it makes me think of the simple but iconic songs of Big Country or the Clash with a real hooky guitar riff that then drops into an excellent rock song. Also I smiled at the idea of using plastic covered furniture as a metaphor for someone just being there til you need them.

Pawn Takes Rook is my favourite track on the album. That discordant guitar chord at the beginning gives me the shivers in a good way. In fact, the minor melody throughout is gorgeous and really plays to my goth sensibilities. There are layers and feedback buzzes that make what is, essentially, a fairly simple song, so much richer.

Talking of simple songs, the bright acoustic start to Inch By Inch belies the bleak lyrics. When a song starts “I hung myself with my own strings” your ears do a double take. It continues in the same vein (sic) and I could really see this as a chart song (it wasn’t at the time) in this age of depressing singer songwriter folkiness.

Nails and Teeth In Pavement, musically, was a close second for my favourite. The orchestration and musicality made me sit up and take notice and are equalled by the interesting use of conventional instruments. That plinky guitar sound is superb.

Lean is the final song and it reminded me of something else* at the start but soon veered off to being its own animal and proves to be a good way to round out the album with a very “end of the night in the pub” vibe about it and I adored the hanging chord at the end.

So, yeah, all in all, not a bad album and very listenable. I like the general feel of it and Swindle’s vocals are indeed magnificent. For me, it does tend to get a little same-y if you sit down and listen to all the tracks one after the other like you’re meant to with an album but I can definitely see the odd song making it into my current playlists. But I think you can call me educated this time as it’s an album I hadn’t given time to before, even though I knew it existed, so I do feel like I’ve learned something.

*After a lot of thinking, humming tiny snatches of off-tune tune and mumbling half remembered random words it was Meredith Brooks’ song Bitch that I was thinking of [sounds nothing like it – Ed].