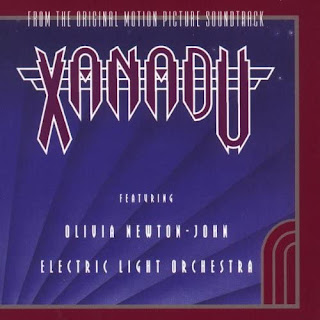 Inspired by our series of Turn That Noise Down articles looking back at music released 30 years ago, Jimmy Hunter takes a step further back in time to his favourite albums from 40 years ago. This week on TTND80, he rediscovers the legend of Xanadu...

Summer 1980 saw me influenced in a cultural way that thrilled me. Three weeks visiting relatives in Canada and I experienced a culture and a people I’d never encountered or thought existed. They weren’t American and laughed off, quite sharply, the suggestion of any similarity. And since I started listening to Paul Gambaccini’s Radio 1 Saturday afternoon show, I was becoming ever more fascinated with north American music.

It does make (some sort of) sense to have seen the film from which this soundtrack is taken – but I warn you, should you watch it, do not blame me! It’s terrible. The musical numbers are actually good because they’re written and produced by two very talented and successful writers: Jeff Lynne and John Farrar – they get one side (5 tracks) each. To evidence this, the album went double platinum and produced 5 hits singles, 2 of them topping various charts.

The tracks are performed by a number of artists with solid reputations, like them or not. But aside from the duets and collaborations, like the writing, the performers are associated with the writers and have a side each: ELO and Olivia Newton-John.

Side one features, in my humble opinion, an artist with one of the best voices in pop history – Olivia Newton John. You may not agree [Putting it mildly! – Ed] but note that I’m not talking about other genres, just pop. The tracks on this side do vary with ON-J collaborating on 3 tracks but the first, and the biggest North American commercial hit of the album, is Magic. This has John Farrar’s signature production techniques and sound all over it. It’s a good record, musically it has light and shade and shows off ON-J’s voice well.

The next 4 tracks are not as strong: Suddenly, a duet with Cliff Richard, is really not my cup of tea but musically it’s robust and very much a product of its time. Apart from Magic, the strongest track here is Dancin’ – a surprising collaboration with The Tubes. I say surprisingly as I was introduced to the group a year before whilst watching late night BBC2 music programmes and found them performing their single Prime Time (I reviewed this last year: https://www.albiemedia.com/2019/04/sotd79-tubes.html ). Mixing ON-J’s harmonies solo in a ‘40s style with a guitar laden section by The Tubes, the result is quite astonishing and for me, still enjoyable.

We then have a romantic interlude that I find just blindly aimed at the north American market and although well constructed, I find Suddenly rather very dull. The last track on side 1 is a duet with Gene Kelly and it’s a rather good attempt at ‘40s musical style: I think it works. Their voices work well together and the tune itself is entertaining.

Flipping to side 2 we have 5 tracks from the glorious Electric Light Orchestra. A quick search for ELO on AlbieMedia demonstrates how much they’ve featured, including my own reviews, with references in other articles and numerous mentions in the popular #NotBaconBits features. If anyone says they can’t identify a Jeff Lynne sound then I’ll buy them a hearing aid.

Kicking off with I’m Alive, side two proposes to deliver more than side 1, particularly if you’re an ELO fan and I like this track a lot. Its popularity was eclipsed by All Over The world but I do think this is a better, less anthemic track. The use of synthesisers is reminiscent of Shine a Little Love and Lynne’s/ELO’s signature harmonies are put to full, tuneful use.

All Over the World was commercially a bigger success yet I don’t find it to be as good, however when you think of track sequencing, it fits perfectly – particularly given what we end on. A hidden gem is the second track – The Fall. This definitely has all the hallmarks of a great album track and it was right to not have had this as a single release. Though it has the later, big ELO sound, its construction reminds me of earlier ELO and this, for me at least, really works.

Then there’s the almost to be expected ballad. ‘nuff said.

And then we end on the album’s biggest hit: Xanadu. If you don’t like it then you never will. If you think it’s not cool then you’ll never hear it. But what it is, is one of the best constructed pop songs of the decade. ON-J’s voice soars above an almost perfect bassline and melody to glorious effect and as she climbs the (musical) scale at the end, well we wonder how much clenching and pushing was involved! [What? WHAT?? – Ed]

It’s interesting to note that both ELO and ON-J at this point were each on the crest of a wave, both commercially and creatively. Both at this point having had increasing and massive success in the past 5 years, it’s hardly surprising that this album did so well, despite the film it was written for. However, I don’t think it could have worked simply as a collaboration because something had to orchestrate the album: and that was the film. As a concept, if would probably have been left as a collection of half-written, unrecorded songs and that would have been a great shame.

If you like pop, give this a go, with an open mind. Listen to the melodies, the production and try to ignore the heavy metal decriers of this genre: they’re just jealous.