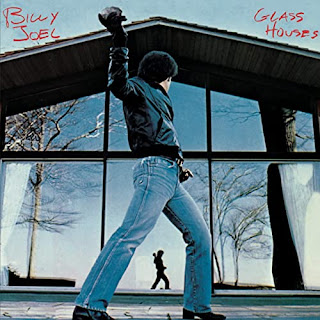 Inspired by our series of Turn That Noise Down articles looking back at music released 30 years ago, Jimmy Hunter takes a step further back in time to his favourite albums from 40 years ago. This week on TTND80, he shouldn't throw stones...

This was the last album from this artist I actually bought. Why? Well, things change and I may have gone in a slightly different direction but then so did Billy Joel. And apart from two singles (1989 and 1993) I thought his subsequent output lacked the depth that everything he’d done to this point had. I may yet go back and try them again, who knows?

Glass Houses is an album I love and I loved it even more when I bought it on my holiday in Canada. Everything I’m listening to from this time in 1980 has an increased poignancy as I recently learned of the death of the family member in Canada we had stayed with during our summer holiday. And I remember the first time I heard this album, very clearly indeed.

Ten tracks on offer this time, unlike Joel’s previous two albums which had 9, containing a couple of 5/6 minute and 6/7 minute tracks. Millennials will have to google this concept, never having had anything other than dozens of tracks per album; but don’t get me started on that! [Don’t tell me, you have an opinion on THAT too? – Ed] It’s also why sequencing of tracks on an album was so important.

This is an album stuffed with goodies. The tracks differ in style and production type and yet it all comes from one producer – Phil Ramone (as did his previous two albums). The tracks that really resonate what American rock was like at the time stand out by a mile here, and while some may view these as done in a pop style, I think those people couldn’t be further from the truth: there are chord sequences and melodies, even if only brief glimpses, that echo the best of the genre.

Side 1 doesn’t have a single dud. Kicking off with You May Be Right (aside: the group that recorded the theme to Friends got their opening guitar chords right here in the opening bars of this track!! [Err, can we get the lawyers to look at this?? – Ed]). Starting with the sound of breaking/smashing glass (get it???) the guitar provides the hook, echoed in the bass. But it’s no simple three minute rock track. It tells a story and has a solid construction.

Sometimes A Fantasy is a surprisingly good and strong second track. It’s not loaded with guitars but musically I think it’s a strong rock track. His singing is reminiscent of ‘50s rock’n’roll (a theme in other tracks) and the way the chorus plays out provides a great melody with hooky backing vocals (oh-oh-oh-oh).

We move into a smoother offering with Don’t Ask Me Why. Acoustic guitars and a comforting heavy bass support a bouncy melody and good vocals. There’s a maturity to this that adds texture to the album and helps to not make it something he was criticised for at the time – trying overly hard to be (American) rock-ish.

Track 4 was a massive US hit at the time of my visit and this is what my Dad’s cousin’s son (18 months younger than me) was playing in the bedroom we shared. I loved it then and surprisingly still love it a bit now. ‘50s rockabilly but to ‘80s instruments and (no, surely not!!) a disco beat. It was actually very popular in the discotheque at the time. It’s Joel’s lament to how music has changed. ‘50s style rockabilly was prevalent in the ‘70s and inhabited the UK charts quite a bit into the new decade and I was thought this lampooned that somehow. Perhaps not. But again, when you consider the sequencing, we’re being taken on a journey with this album.

Ending side 1 is All For Leyna with its hooky chorus and piano punctuation marks. The keyboard intro is reminiscent of Foreigner’s Cold As Ice and it’s a pleasing mix of pop and American rock. One thing that impresses all the way through is Joel’s vocals and this separates him from other rock artists. Although the “repeat to fade” on this track lasts about a minute longer than it should.

Side 2 is a delightful mix of good “album” tracks and you can tell the difference between this and side 1 in terms of commercial appeal for single releases. I wonder if this goes/went through an artist’s mind when writing or choosing the tracks.

Kicking things off is I Don’t Want To Be Alone Anymore and it’s a blend of styles: reggae and Elvis Costello featuring largely in my mind as I listen, but all under the umbrella of what American pop/rock sounded like then – done properly.

Sleeping With The Television On has always provided me with this imagery: a character we’ve seen on countless US TV shows, he’s a waster and sits in his apartment in his underwear drinking beer and popping out for the occasional takeaway. Perhaps a mule for the local dealer. This song is NOT about any of that but this is always the image that comes to mind. A good rock track and a good hook running through it (“all night long, all night long”).

Following a similar format to side 1, here we have a significantly different track, mid-side. C’etoit toi (You Were The One) is a track I really like and not because half of it is sung in French (for added Frenchness listen out for the accordion in the background). It’s well constructed, if a little lacking in oomph and it has a good melody.

According to iTunes, the two least popular tracks are the last two – Close To The Borderline and Through The Long Night. I can understand this with the penultimate track which really does shout b-side to me. It’s not a bad track but far from the strongest on the album with its heavy-ish guitar and vocal effects.

You’d be forgiven for thinking that the album ends on a lament but I don’t think it does. Through The Long Night combines a melody and vocal harmonies you might find on a folk album. The lyrics are definitely pop oriented but it’s an enjoyable track. No, it doesn’t fit with the rest of the album and many at the time were disappointed in this choice on which to end the album.