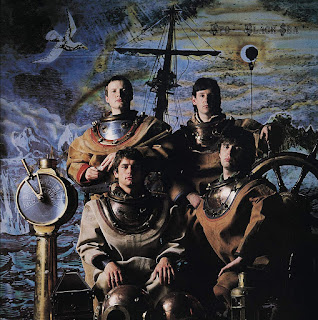 Inspired by our series of articles looking back at music released 30 years ago, Jimmy Hunter takes a step further back in time to give us a Song of the Day 1980. This week, he salutes XTC's Generals and Majors...

I wanted to review this week’s choice partly to provide a view of “progress” from my review from almost a year ago (https://www.albiemedia.com/2019/09/sotd79-xtc.html ). Decide for yourself if it’s progress.

XTC had recorded another album (Black Seas) and released Generals and Majors as the lead single – commercially more successful than anything previous but in my mind, not as good as Making Plans for Nigel. There’s lots of guff [What?? – Ed] around about what they might or might not have been aiming for.

Whereas Making Plans… is a great New Wave track, this single is pure pop and though technically it’s not BAAAD bad, it’s disappointingly not as good.

Irritatingly, Branson features largely in the video and this was against the band’s wishes. But it seems his ego had more authority than their creativity. Or that of the video maker. That said, the video really is not good. Done in a Madness style, it doesn’t work. But then the choppy pop-style (which reminds me of The Skids’ Working for the Yankee Dollar) doesn’t fit the lyrics.

So, what are we left with? Well, XTC’s biggest commercial hit single that brought them to the attention of a much wider world. Was it indeed progress?