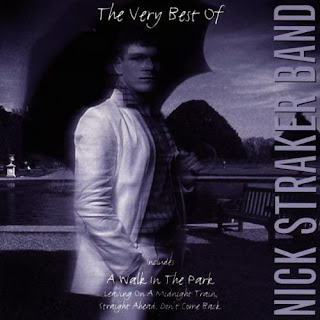 Inspired by our series of articles looking back at music released 30 years ago, Jimmy Hunter takes a step further back in time to give us a Song of the Day 1980. This week, he goes for A Walk in the Park...

If you want to know what I looked like at some point in 1980 then have a look at the lead singer of this week’s band. If anyone around my age says they didn’t have a perm in the ‘70s or early ‘80s then they’re quite simply lying. Or ashamed. Or deeply uncool. I’ll also admit to the tiniest of crushes on ol’ Nicky, the lead singer. But only tiny.

This week we are bopping to what I always think of as one of the kick-offs of the Eurodisco sound – A Walk in the Park by the Nick Straker Band. Yes, it’s poppy and yes it smacks of “the holiday disco hit” – and it had actually been a massive hit in (western) Europe throughout the summer but having just returned from three weeks Canada, I’d missed it.

I do like this record though. A bouncy keyboard and bass intro with the inevitable handclap machine and a simple bassline that effectively goes up a few notes then back again. The lyrics are light, fluffy and largely meaningless but as a post-summer record, it kept the discos going well into autumn and I remember dancing to it still at a weekly disco into October.

The drum roll and peel of syndrums heralding the chorus actually provide the hook, along with an escalation in sound and instruments and the repetitive chorus with added falsetto voices:

Some of the members of the group were simultaneously members of New Music so were entertaining themselves with a couple of hits around the same time. The band didn’t hold stick around that much after the next album or two. Seven years later, Stock Aitken and Waterman (PWL) did the inevitable remix and it was a hit all over again.

This latter tragedy notwithstanding, I think it’s as good now as it was then [You always do! – Ed] and here is the band’s first appearance on Top of the Pops …