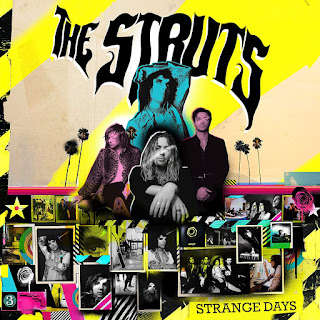 AlbieMedia's Song of the Day (SotD) is our choice of a single or album track that we think you need to hear. Today, Susan Omand struts her stuff with Robbie Williams... or something...

"OK, who are The Struts and why have I never heard of them before now?!"

That was me as I listened to Strange Days - a song that I only found randomly due to my YouTube channel throwing Robbie Williams at me [that's just wishful thinking - Ed] in my recommended videos the other day.

OK, so who are The Struts? Well, according to my extensive research [you found the wiki page didn't you? - Ed] they are a British rock band, from Derby, that were formed back in the heady, carefree days of 2012. Citing influences like Queen, The Stones, Aerosmith and The Darkness [nobody's perfect - Ed], they have made a name for themselves on the touring circuit and opened for the likes of Guns n Roses, The Who and The Foo Fighters on their North American tours. However, for all their success across the pond, the band don't seem to have made it that big on home soil yet. Their first two albums, Everybody Wants and Young and Dangerous, bubbled under in the UK charts, peaking at 52 and 77 respectively and Strange Days, their third album and from which this title song with the Robster comes, is due out on October 16th.

As for the song itself? For me, for a ballady type thing, it ticks all the right boxes. The start sounds like late 90s Robbie, think "She's the One," but with added Rolling Stones - I'm pretty sure there's a Ruby Tuesday sample in there somewhere - and an attractive retro glam rock styling to the band's look; Robbie is just peak showboating Robbie, naturally, and all the better for it. Surprisingly, it's a combination that works very well indeed. The video, given all the current restrictions, is really well done too, it plays to the strengths of both singers and has been very creative within its limitations with clever use of projection screens. That virtual elbow bump at the end is genius!

Needless to say, I am a little bit in love with the band, now that I have discovered their existence, and there will be some back catalogue diving - I'll let you know what I think of the new album when it comes out too. But for now... here's Robbie.