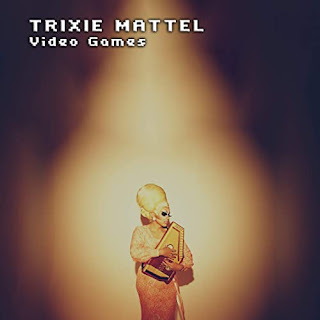 Modern pop culture legend and LGBTQ+ groundbreaker Trixie Mattel has raised the bar a notch higher on an already accomplished career with her reinterpretation of Lana Del Rey’s powerhouse debut single and now-iconic 2010s indie ballad Video Games. With her signature autoharp in-hand, Mattel speeds up the tempo and trades the orchestral grandiosity of the original for a lonesome western whistling and an arrangement forged in the fires of classic mournful country and Americana.

The video combines the iconic melodrama of its source material with Trixie’s patented life-size Barbie style as imagery of cowboys, horses and classic videos games are projected over her, serving as an allusion to the grainy footage, vintage montage aesthetic of Lana Del Rey’s original video.

In a feature with Consequence of Sound, Mattel cites numerous influences that spurred her reinterpretation of the track, including the cinematic vibes of films like Kill Bill Vol. 2 and Fantasia, classic toy commercials, Pioneertown (an unincorporated classic western town in the San Bernardino desert that often serves as the location for film shoots), and the beautiful yet melancholy nature of living in Los Angeles this past summer.

Over the past few years, Trixie Mattel has become a trailblazer in the pop culture universe, redefining what it means to be a drag queen by releasing three acclaimed, charting albums (‘Two Birds’, ‘One Stone’, and most recently, 2020’s ‘Barbara’), launching a successful cosmetics company Trixie Cosmetics that has flourished even amidst the global pandemic, co-authoring the NY Times Best Seller Trixie and Katya’s Guide To Modern Womanhood, raising over $100k for numerous charities and organizations in 2020 through her Twitch Tuesday video game livestreams, and becoming a celebrated touring and YouTube comedienne (best known for the wildly popular UNHhhh and the Netflix-produced I Like to Watch series), all while winning the third season of RuPaul’s Drag Race All Stars.
Here's Trixie's version:
And, in case you need the reminder, here's Lana's original:
Image - Amazon
Email ThisBlogThis!Share to TwitterShare to Facebook